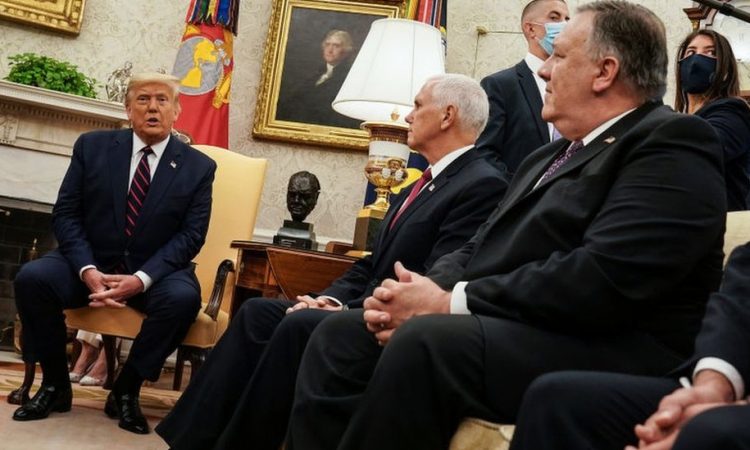 The advisers warned him that military action could spark a broader conflict, officials were cited as saying.

The White House has not commented on the accounts of the meeting.

It took place a day after the global nuclear watchdog said Iran’s enriched uranium stockpile was 12 times what was permitted under a 2015 nuclear deal.

The landmark accord saw the US and five other world powers give Iran relief from crippling economic sanctions in return for limits on sensitive activities to show it was not developing nuclear weapons.

President Trump abandoned the deal in 2018, saying it was “defective at its core”, and reinstated US sanctions in an attempt to force Iran’s leaders to negotiate a replacement.

They have refused to do so and retaliated by rolling back a number of key commitments, including those on the production of enriched uranium.

US President-elect Joe Biden, who will take office on 20 January, has said he will consider rejoining the nuclear deal so long as Iran returns to full compliance and commits to further negotiations.

Low-enriched uranium – which typically has a 3-5% concentration of uranium-235, the most suitable isotope for nuclear fission – can be used to produce fuel for power plants. Weapons-grade uranium is 90% enriched or more.

The New York Times reported on Monday night that Mr Trump had discussed how to respond to the IAEA report at a meeting in the Oval Office with top national security advisers, including Vice-President Mike Pence, Secretary of State Mike Pompeo, acting Defence Secretary Christopher Miller and General Mark Milley, the chairman of the US military’s Joint Chiefs of Staff.

US officials familiar with the meeting said the president had asked to be briefed about the options for a strike on Iran’s main nuclear site – an apparent reference to Natanz.

The advisers argued that military action could lead to a broader conflict in the region in the last weeks of his presidency, according to the officials.

“He asked for options. They gave him the scenarios and he ultimately decided not to go forward,” one official told Reuters news agency.

Another told the Wall Street Journal that “a conflict with Iran ends badly for everyone involved”.

Iranian government spokesman Ali Rabiei warned on Tuesday “any action against the Iranian nation would certainly face a crushing response”.

The US and Iran came close to war this January, after Mr Trump ordered a drone strike in Iraq that killed top Iranian commander Qasem Soleimani, saying the Revolutionary Guards general was responsible for the deaths of hundreds of American troops.

Iran responded by firing ballistic missiles at Iraqi military bases housing US forces. No Americans were killed, but more than 100 were diagnosed with traumatic brain injuries.