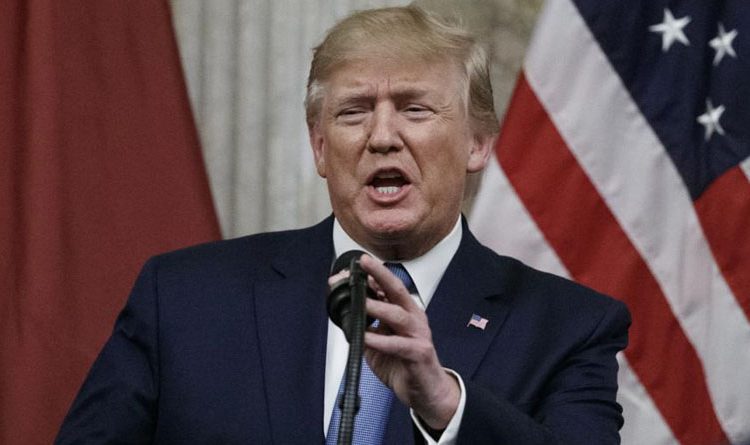 US President Donald Trump has defended supporters of his for their alleged roles in recent deadly street clashes.

He suggested a teen accused of killing two in Wisconsin last week and Trump fans involved in clashes in Oregon on Saturday had acted in self-defence.

He said Joe Biden, his Democratic challenger in the 3 November election, had not specifically disavowed far-left activists accused of civil disorder.

The violence has come amid widespread, largely peaceful anti-racism protests.

Mr Biden, leading in opinion polls ahead of November’s election, has spoken out against violence, accusing Mr Trump of having caused the divisions that stoked it.

A CNN reporter asked the Republican president whether he would condemn supporters of his who had fired paint pellets during a confrontation with counter-protesters at the weekend in Portland, Oregon.

In the ensuing street clashes, a member of a right-wing group, Patriot Prayer, was killed by a suspect who has reportedly described himself as a member of antifa, a loosely affiliated network of mainly far-left activists.

On Monday, police named the man shot dead as Aaron Danielson. No arrest has been made.

“Well, I understand they had large numbers of people that were supporters but that was a peaceful protest,” Mr Trump replied to the CNN reporter, in an apparent veiled dig at US media outlets whom he has previously accused of ignoring violence at Black Lives Matter demonstrations.

“Paint is a defensive mechanism, paint is not bullets.

“Your supporters, and they are your supporters indeed, shot a young gentleman who – and killed him, not with paint but with a bullet. And I think it’s disgraceful.”

Another reporter asked Mr Trump whether he would condemn a shooting in Kenosha, Wisconsin, allegedly by a teenager once pictured at one of the president’s rallies.

Kyle Rittenhouse, 17, is accused of shooting three people, two fatally, last week amid demonstrations in the city over the police shooting of Jacob Blake.

“We’re looking at all of that,” Mr Trump said in his first public comments on the shooter, “that was an interesting situation, you saw the same tape as I saw, and he was trying to get away from them, I guess, it looks like. And he fell, and then they very violently attacked him.

“And it was something that we’re looking at right now, and it’s under investigation.

“I guess he was in very big trouble, he probably would have been killed.”

Kyle Rittenhouse, who was charged as an adult, has not yet been brought to trial.

Representative Eric Swalwell of California tweeted that the president had just made Republicans “the Mass Shooter Party”. It was the Democratic nominee’s most determined effort yet to counter Republican criticism that he was weak on law and order.

“Do I look like a radical socialist with a soft spot for rioters?” said Mr Biden, speaking in Pittsburgh, in the critical US election state of Pennsylvania. “Really?”

The former US vice-president accused Mr Trump of having fomented violence in the US for years.

“You know,” said Mr Biden, “he may believe mouthing the words law and order makes him strong but his failure to call on his own supporters to stop acting as an armed militia in this country shows how weak he is.”

“Does anyone believe there will be less violence in America if Donald Trump is re-elected?” he asked.