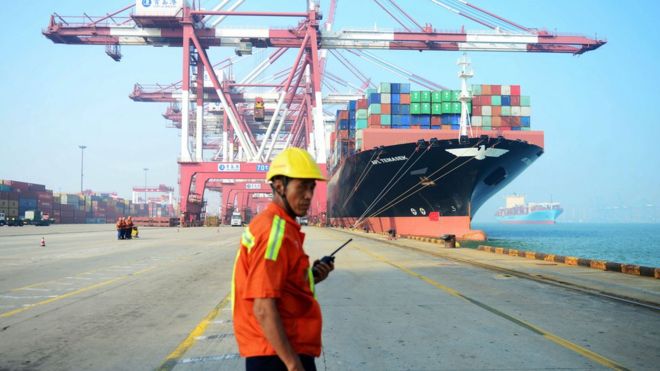 The US is delaying imposing tariffs on some imports from China until 15 December because of “health, safety, national security and other factors”.

The surprise news from the United States Trade Representative office sparked a 5% jump in Apple shares.

Other items facing a 10% tariff will go ahead as planned on 1 September.

The USTR’s announcement was released minutes after China’s Ministry of Commerce said Vice Premier Liu He had conducted a phone call with US trade officials.

Technology investors welcomed news of the exemptions, pushing an index of chip stocks up 2.8%. Wall Street’s three main share indexes rose more than 1.5%. In the UK, stocks exposed to global trade also rose, with Glencore up 2.5%.

US President Donald Trump said on 1 August he would impose a 10% tariff on $300bn of Chinese goods, blaming China for not following through on promises to buy more American agricultural products.

He also personally criticised Chinese President Xi Jinping for failing to do more to stem sales of the synthetic opioid fentanyl amid an opioid overdosing crisis in the US.

But in a tweet on Tuesday, Mr Trump hinted that he was expecting something in return, suggesting that China’s failure to “buy big” from US farmers could be about to change.

The USTR’s announcement comes amid growing concerns about a global economic slowdown. Goldman Sachs said on Sunday that fears of the US-China trade war leading to a recession were increasing.

The Xinhua news agency said that the Chinese officials issued “a solemn protest” against the punitive duties set to come into effect on 1 September. Mr Lighthizer and Mr Liu have scheduled another telephone call in two weeks.

The two sides were due to hold another round of meetings in Washington in September, but the deterioration in relations in the past two weeks cast doubt on whether the talks would take place.

Additional details and lists of the specific product types affected by the announcement are due to be published by USTR later.