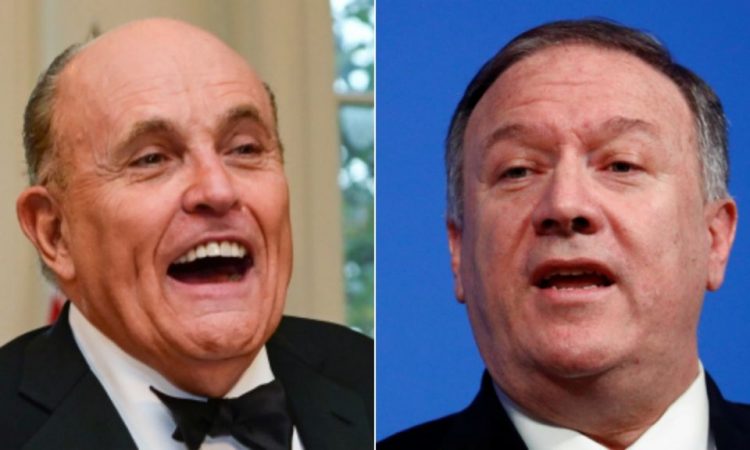 The US State Department has released records relating to the Trump administration’s dealings with Ukraine.

Documents were released to the ethics watchdog American Oversight after a freedom of information request.

US ties with Ukraine are at the centre of an impeachment investigation against Mr Trump.

The president is accused of withholding aid to Ukraine that had been approved by Congress to pressure the country into investigating his political rival Joe Biden.

Mr Giuliani has been accused of trying to discredit former Ukraine ambassador Marie Yovanovitch while running a shadow US foreign policy on Ukraine. There have been questions over what Secretary of State Mike Pompeo knew.

The records show Mr Pompeo and Mr Giuliani repeatedly spoke to one another – although the topics of those conversations remain unknown.

Emails among the documents suggest the pair spoke on the phone on 27 and 29 March.

The second call came after Mr Giuliani’s staff emailed a personal assistant to President Trump, Madeleine Westerhout, to ask if she had a phone number for Mr Pompeo.

Ms Yovanovitch was dismissed as ambassador to Ukraine in May.

“We can see why Mike Pompeo has refused to release this information to Congress. It reveals a clear paper trail from Rudy Giuliani to the Oval Office to Secretary Pompeo to facilitate Giuliani’s smear campaign against a US ambassador,” said American Oversight Executive Director Austin Evers in a statement.

“This is just the first round of disclosures. The evidence is only going to get worse for the administration as its stonewall strategy collapses in the face of court orders.”

Ms Yovanovitch testified to the impeachment inquiry last week that she was fired over “false claims” by people with “questionable motives”. She believes her anti-corruption efforts angered influential Ukrainians who then sought to remove her.

The president attacked her in a tweet while she was giving her testimony. The diplomat said it was “very intimidating”.

President Trump again attacked Ms Yovanovitch in a phone call to Fox News on Friday, saying she “wouldn’t hang my picture in the embassy” and “was not an angel”.

But a letter dated 5 April included in the document cache – signed by six former US ambassadors to Ukraine – expresses concern about the allegations against Ms Yovanovitch, describing them as “simply wrong”.

“Ambassador Yovanovitch… has a flawless record as a diplomat,” the letter reads. “She is a professional of the highest integrity.”