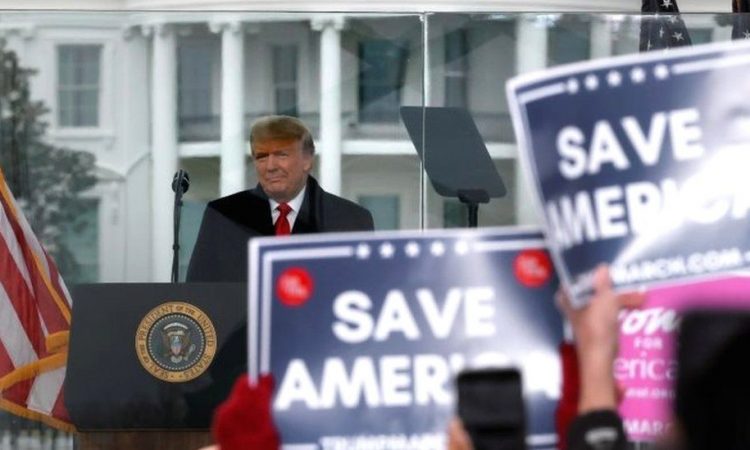 Donald Trump’s insurrection incitement charge is a “monstrous lie”, defence lawyers said as they presented evidence in the US Senate.

Mr Trump is accused of causing riots in the Capitol on 6 January which left five people dead. He denies the charge.

Most Republicans have indicated they will not vote to convict Mr Trump.

The defence team took less than four of its 16 hours, trying to move the impeachment trial to a speedy end.

After this, senators were given four hours to ask questions of the two sides.

Earlier, they sat through two days of minute-by-minute accounts featuring video and audio footage, as Democratic prosecutors sought to show that Donald Trump had a pattern of condoning violence, had done nothing on the day to prevent the riot, and had expressed no remorse.

They argued that an acquittal could see a repeat attack on Congress.

On Friday, Mr van der Veen used his opening remarks to dispute the Democrats’ case that Mr Trump had incited violence during his speech to supporters on 6 January in Washington DC to try to stop Joe Biden’s election victory being certified.

Mr Trump had made allegations of voter fraud and urged his supporters to converge at the Capitol building a short while before the riot broke out.

However, the fact there was evidence among some groups that violence had been pre-planned demonstrated “the ludicrousness of the incitement allegations against the [former] president”, Mr van der Veen said, adding: “You can’t incite what was already going to happen.”

“To claim that the president in any way wished, desired or encouraged lawless or violent behaviour is a preposterous and monstrous lie. In fact, the first two messages the president sent via Twitter once the incursion at the Capitol began were ‘Stay Peaceful’ and “No violence because we are the party of law and order,'” the lawyer said.

Make no mistake, he told the senators, “this is an effort to smear, censor and cancel not just President Trump, but the 75 million Americans who voted for him”.

The lawyer also argued that Mr Trump had a legal right to challenge the election result.

“In the past, numerous other candidates for president have used many of the same processes to pursue their own election challenges,” Mr van der Veen said, before showing a montage of clips from 2017 when Democrats objected to the election results that gave Mr Trump his victory.