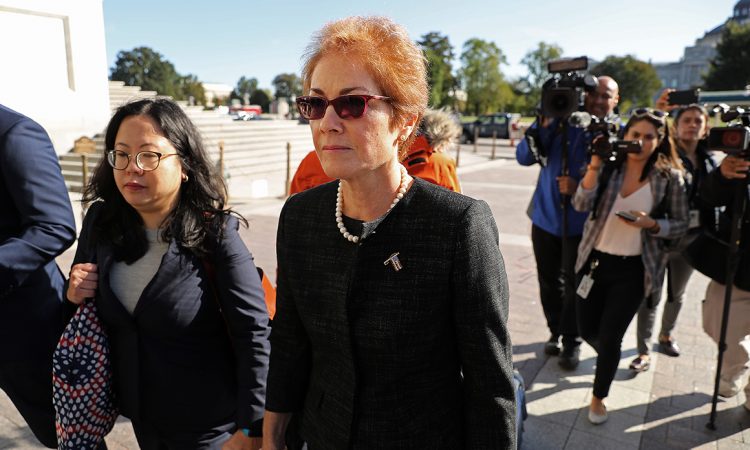 WASHINGTON, DC - OCTOBER 11: Former U.S. Ambassador to Ukraine Marie Yovanovitch (C) is surrounded by lawyers, aides and journalists as she arrives at the U.S. Capitol October 11, 2019 in Washington, DC. Yovanovitch was invited to testify behind closed doors to the House Intelligence, Foreign Affairs and Oversight committees as part of the ongoing impeachment investigation against President Donald Trump. (Photo by Chip Somodevilla/Getty Images)
251views

The former US ambassador to Ukraine has told lawmakers she was sacked over “unfounded and false claims by people with clearly questionable motives”.

Marie Yovanovitch said she was “incredulous” at being dismissed by President Donald Trump in May.

Her testimony is part of an impeachment inquiry against the US president.

The Democratic probe is looking into whether Mr Trump improperly pressured Ukraine to investigate his political rival Joe Biden.

It was sparked by a whistleblower complaint about a July phone call between the Republican president and his Ukrainian counterpart Volodymyr Zelensky.

During that conversation, Mr Trump described Ms Yovanovitch as “bad news”, according to a rough transcript released by the White House.

The decision to dismiss her several months earlier reportedly followed the US president’s personal lawyer Rudy Giuliani and other conservatives arguing she was biased against the president.

Democrats believe she was ousted, in part, because she insisted that requests from Mr Giuliani to Ukrainian officials for an investigation into Mr Biden should be relayed through official channels, the BBC’s Gary O’Donoghue in Washington says.

Mr Giuliani had been working in Ukraine to press the authorities to investigate widely debunked corruption allegations against Mr Biden, and his son, Hunter, who was associated with a Ukrainian company.

Mr Giuliani is coming under increasing scrutiny over his work for the president. Asked by reporters on Friday if Mr Giuliani was still his lawyer, Mr Trump answered ambiguously: “I don’t know. He’s a very good attorney and he has been my attorney.”

“Although I understand that I served at the pleasure of the president,” Ms Yovanovitch said in a prepared statement, “I was nevertheless incredulous that the US government chose to remove an ambassador based, as best as I can tell, on unfounded and false claims by people with clearly questionable motives.”

She said she did not know Mr Giuliani’s reasons for attacking her.

“Equally fictitious is the notion that I am disloyal to President Trump,” Ms Yovanovitch said. “I have heard the allegation in the media that I supposedly told the embassy team to ignore the president’s orders ‘since he was going to be impeached.’ That allegation is false.”

In her prepared remarks, the 33-year veteran of the foreign service and three-time ambassador delivered a blistering rebuke to a US State Department “attacked and hollowed from within” where “private interests circumvent professional diplomats for their own gain, not the public good”.

She warned of the harm that will come to the US when “bad actors” realise “how easy it is to use fiction and innuendo to manipulate our system”.

Ms Yovanovitch said she had never met or spoken with Hunter Biden and that Joe Biden had never raised with her the subject of his son or the Ukrainian gas firm that employed him.