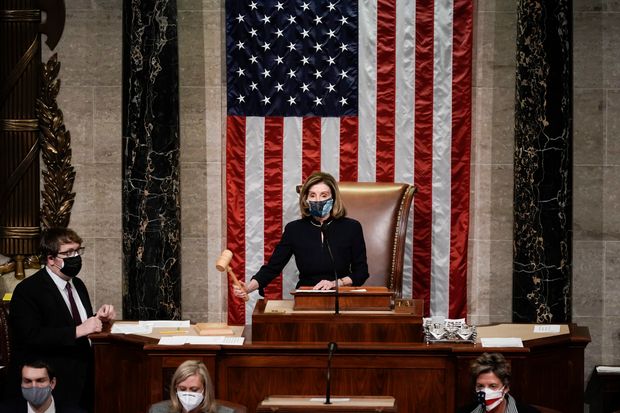 US Republicans in Congress are deeply divided after 10 members split with their party to impeach President Donald Trump on Wednesday.

Congresswoman Liz Cheney, the third ranking House Republican, is facing calls to resign her party leadership role after her vote to impeach.

The lawmakers who voted against Mr Trump face threats of violence, and have increased security, they say.

It comes as Mr Trump prepares to leave office and faces a trial in the Senate.

The House of Representatives voted by 232 votes to 197 on Wednesday to impeach him for allegedly inciting rioters who stormed the Capitol last week.

The FBI has warned of possible armed protests planned for Washington DC and all 50 US state capitals in the run-up to Democratic President-elect Joe Biden’s inauguration on Wednesday.

Mrs Cheney, a Wyoming congresswoman whose father was vice-president to Republican George W Bush, faced immediate calls to resign after voting to impeach Mr Trump for inciting insurrection against the US government.

“I’m not going anywhere. This is a vote of conscience,” said Mrs Cheney, after Mr Trump’s conservative defenders in Congress called for her to quit.

“It’s one where there are different views in our conference. But our nation is facing an unprecedented, since the Civil War, constitutional crisis,” she told reporters on Wednesday, as Trump was impeached for a historic second time.

Another Republican has said he and several colleagues have purchased body armour and have been forced to change their normal routines after receiving threats of violence.

“It’s sad that we have to get to that point, but you know our expectation is that someone may try to kill us,” Michigan Republican Peter Meijer told MSNBC on Thursday.

“We don’t know what’s going to happen next. We weren’t expecting for the Capitol to get overrun for the first time in 200 years,” he said.

“And so in this unprecedented environment with an unprecedented degree of fear, of divisiveness and hatred, we have to account for every scenario.”

For two hours, members of the Democratic-controlled House made statements for and against the vote on impeachment while National Guard troops kept watch inside and outside the Capitol.

Most Republicans did not seek to defend Mr Trump, but instead argued that the impeachment had bypassed the customary hearings and called on Democrats to drop it for the sake of national unity.

“Impeaching the president in such a short time frame would be a mistake,” said Kevin McCarthy, the House’s top Republican. “That doesn’t mean the president’s free from fault. The president bears responsibility for Wednesday’s attack on Congress by mob rioters.”

Impeachment charges are political, not criminal. The president was accused by the House of inciting the storming of the Capitol – the seat of the US Congress – with a speech on 6 January to supporters outside the White House.

He urged them to “peacefully and patriotically” make their voices heard, but also to “fight like hell” against an election that he falsely told them had been stolen.

Following Mr Trump’s remarks, his supporters broke into the Capitol, forcing lawmakers to suspend certification of election results and take shelter while the building was placed on lockdown.

The article of impeachment states that Mr Trump “repeatedly issued false statements asserting that the presidential election results were fraudulent and should not be accepted”.

It says he then repeated these claims and “wilfully made statements to the crowd that encouraged and foreseeably resulted in lawless action at the Capitol”, leading to violence and loss of life.