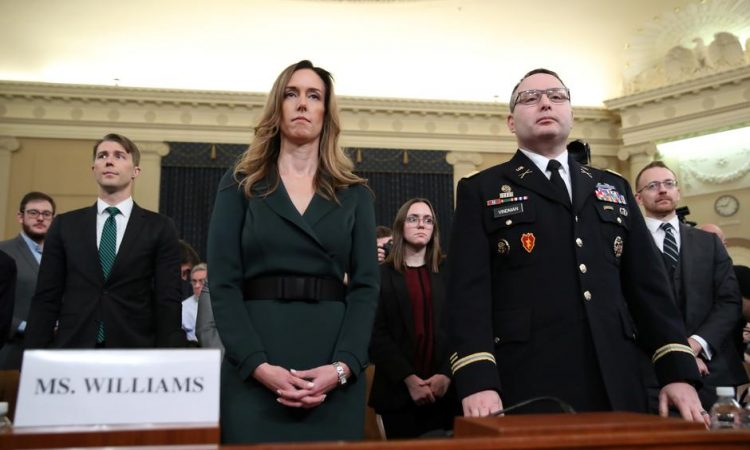 A US Army officer and key impeachment witness saw his loyalty called into question by Republicans on Tuesday, as he maintained it was his “duty” to flag an “inappropriate” telephone call by President Donald Trump.

Alexander Vindman, a lieutenant colonel and National Security Council member, was listening in — as the White House’s top Ukraine expert — to Trump’s July 25 call with President Volodymyr Zelensky that is at the heart of the impeachment inquiry threatening the US leader.

Testifying before the House Intelligence Committee as it kicked off a second week of televised hearings, Vindman said he was so alarmed by Trump’s request for the Ukrainian leader to probe his potential 2020 rival Joe Biden that he reported it to an NSC lawyer “out of a sense of duty.”

Democrats are seeking to establish whether Trump abused the power of his office by leveraging military aid and a White House meeting to extract a commitment from Zelensky to probe former vice president Biden and his son.

Their July phone call is the crux of the investigation, and Americans were finally able to hear live testimony from officials who listened in firsthand — Vindman and Jennifer Williams, a foreign policy advisor to Vice President Mike Pence.

“It is improper for the president of the United States to demand a foreign government investigate a US citizen and a political opponent,” Vindman told the hearing.

“This would have significant implications if it became public knowledge and it would be perceived as a partisan play.”

The second of four witness appearing on Tuesday, Williams likewise said Trump’s reference to Biden was “unusual” in that it delved into domestic US politics.

During Tuesday’s hearing a pugnacious Trump branded the impeachment inquiry a “kangaroo court” and said he has had no face-to-face contact with Vindman.

As Vindman was testifying, the official White House Twitter feed attacked the officer — who still works in the White House — by quoting another witness who had “concerns” about his judgment.

And the Republican counsel appeared to question the loyalty of the Ukrainian-born Vindman by repeatedly asking how he was invited three times to became Ukraine’s minister of defense — offers Vindman said he “immediately dismissed.”

“Do you have any reason why he asked you to do that?” counsel Stephen Castor persisted, asking whether it was a high honor to have been asked, and whether Vindman kept the “door open” to the offer.

That exchange was also retweeted by the White House.