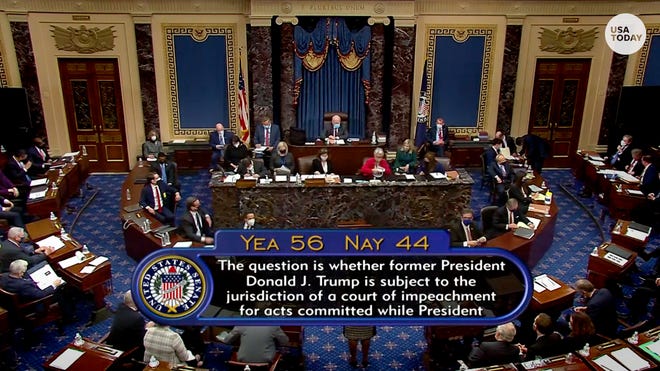 The US Senate has found that the impeachment trial of former President Donald Trump is constitutional, allowing full proceedings to begin.

But a 56-44 majority voted in favour of continuing, with a handful of Republicans backing the measure.

Mr Trump is accused of “inciting insurrection” when Congress was stormed last month.

Thousands gathered in support of false claims that widespread electoral fraud denied Mr Trump victory in the US presidential election.

Democrats prosecuting the case opened Tuesday’s proceedings by showing a video montage of Mr Trump’s 6 January speech and the deadly rioting by some of his supporters.

“That’s a high crime and misdemeanour,” Representative Jamie Raskin of Maryland said of the footage. “If that’s not an impeachable offence, then there’s no such thing.”

The 56-44 split means six Republicans joined Democrats in voting to go ahead with the trial.

Although this shows some bipartisanship, this result implies loyalty toward the former president in his party remains high enough to avoid a conviction.

A two-thirds majority is required to convict Mr Trump in the evenly split 100-seat Senate.

If convicted Mr Trump could be barred from holding office again.

Proceedings opened with impeachment managers – the Democrats tasked with leading the prosecution – arguing their attempts were legitimate.

In the 10-minute video used in their presentation, Mr Trump was shown telling his supporters to “fight like hell” before they stormed the US Capitol in violence that resulted in five deaths – including a police officer.

Rep Raskin was brought to tears as he recounted fear for his own family’s safety during the riot after he was separated from his visiting daughter.

“This cannot be the future of America,” he told senators, who act as jurors for impeachment.

“We cannot have presidents inciting and mobilising mob violence against our government and our institutions because they refuse to accept the will of the people under the Constitution of the United States.”

He argued there could be no “January exception” to impeaching outgoing officials without risking a dangerous precedent.

Lawyers for Mr Trump then took the stand to outline their arguments with detailed complaints and allegations about due process and the constitutionality of proceedings.

Former Pennsylvania prosecutor Bruce Castor opened the defence with a meandering presentation that was met with a critical reception by even allies of Mr Trump.

A second lawyer, David Schoen, was more pointed. He showed videos dating back to 2017 as evidence of what he labelled as an “insatiable lust for impeachment” among Democratic lawmakers.

“What they really want to accomplish here in the name of the Constitution is to bar Donald Trump from ever running for political office again, but this is an affront to the Constitution no matter who they target today,” he told senators.

Republican Senator Bill Cassidy, one of the six to vote with Democrats, said after that the House prosecution had “made a compelling, cogent case and the president’s team did not”.

Widespread reports in US media suggest Mr Trump expressed anger at his lawyers’ performance while watching on television from Florida.

Each side now has up to 16 hours to present their case, starting at noon on Wednesday.

These arguments are expected to run through until the weekend when senators will get a chance to ask both sides questions.

It is unclear if the impeachment managers will then extend the timetable by requesting witnesses be called or subpoenaed – though Mr Trump has already declined to voluntarily testify.

Lawmakers on both sides are said to favour a quick trial, amid an ongoing effort to have President Joe Biden’s coronavirus relief package approved.

With the speedy timetable, it is thought a Senate vote on whether to acquit or convict Mr Trump as early as Monday.