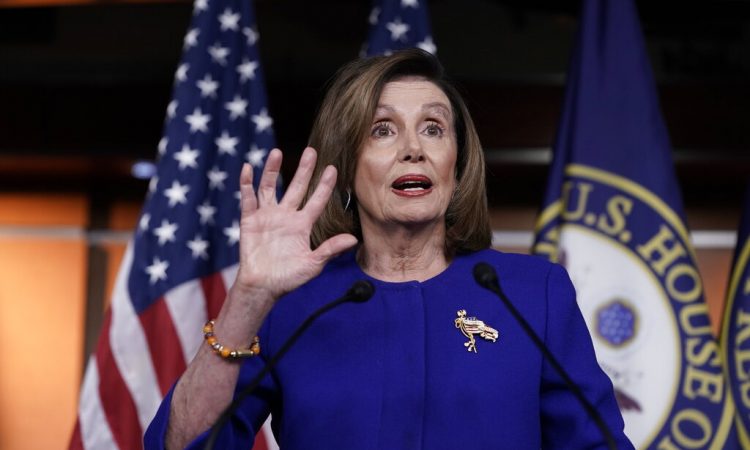 Speaker of the House Nancy Pelosi, D-Calif., meets with reporters following escalation of tensions this week between the U.S. and Iran, Thursday, Jan. 9, 2020, on Capitol Hill in Washington. (AP Photo/J. Scott Applewhite)
189views

The trial of President Donald Trump for abuse of power and obstruction could open within days as House of Representatives leader Nancy Pelosi convenes Democrats early Tuesday to discuss sending impeachment charges to the Senate.

Pelosi appeared ready to move ahead after holding onto the articles of impeachment since they were passed on December 18 to pressure the Republican-controlled Senate to agree to subpoena witnesses with direct knowledge of what Trump is charged with: illicitly seeking help from Ukraine for his reelection campaign this year.

But with Senate Majority leader Mitch McConnell refusing to agree up front on the witness issue, Pelosi is now expected to forward the case without a deal and see the president placed on trial by next week.

Pelosi’s House Democratic caucus is expected to discuss the schedule for a full vote in the House of Representatives, the lower chamber, on forwarding the case.

They also have to decide who will comprise their team of impeachment managers to argue the case against Trump in the Senate, the upper chamber.

Once the House forwards the charges, the Senate has to begin trial proceedings within one day.

On the first day, senators will decide the rules of the historic trial.

Supreme Court Chief Justice John Roberts will then be sworn in to preside; in turn he will swear in the 100 senators to preside as judges and jury over Trump’s fate.

Republican Senator John Cornyn told The Hill news website that he expects all that could happen within this week, and that opening arguments in the trial could take place as early as Tuesday, January 21, after Monday’s federal holiday.

“That’s what it feels like right now,” Cornyn said.

The witness issue remains a point of contention.

Democrats want at least four current and former top Trump aides to appear at the trial, after Trump barred them from testifying in the House impeachment investigation.

They also want documents related to the charges that Trump refused to hand over to the House probe.

The witnesses and documents, Democrats believe, could deliver more concrete evidence that Trump abused his powers for personal political gain and obstructed the Congressional investigation.

“In the Clinton impeachment process, 66 witnesses were allowed to testify including 3 in the Senate trial, and 90,000 pages of documents were turned over,” Pelosi said via Twitter Monday.

“Trump was too afraid to let any of his top aides testify & covered up every single document. The Senate must #EndTheCoverUp.”

But McConnell, backed by the Republicans’ 53-47 Senate majority, says he won’t agree on the issue before the trial opens.

McConnell cites president Bill Clinton’s impeachment trial in 1999, when the contentious witness issue was put off until after opening arguments were made.

Then the two sides agreed to allow three witnesses against Clinton to be deposed.

But in that case Republicans held all the power in Congress against a Democratic president.

In this case, with defendant Trump’s own Republican party in control of the Senate, which sets the rules for the case, Pelosi has little real leverage outside of public pressure.

Democrats are hoping that three or more Republican senators break ranks to insist on the witnesses.

“House Democrats have already done enough damage to precedent, to national unity, and to our institutions of government,” McConnell said in a statement Monday.

“The Senate will not be sucked into this precedent-breaking path.”

Senator Chuck Schumer, the top Democrat in the Senate, accused McConnell of organising a cover-up.

“The Senate’s constitutional duty now is to try that case to the best of our ability, with honesty, with integrity, with impartiality, and with fairness,” he said Monday.

“Without these things, a Senate trial would become a farce — a nationally televised meeting of the mock trial club.”