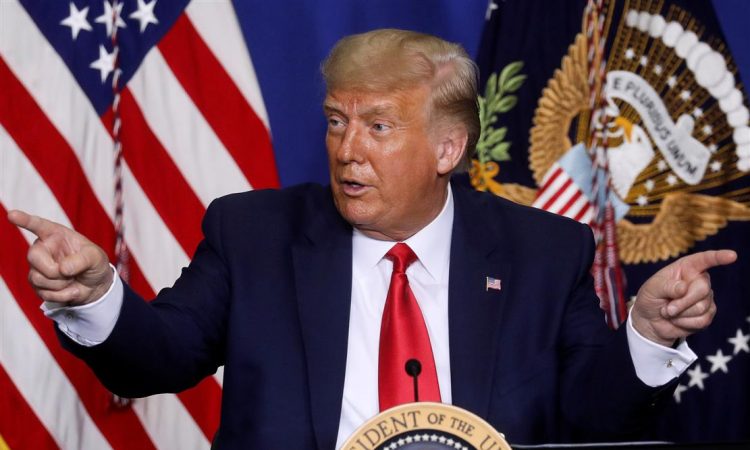 US President Donald Trump is facing a backlash over reports he mocked American soldiers killed in action as “losers” and “suckers”.

The alleged remarks were first reported in the Atlantic magazine, and some details were corroborated by the Associated Press and Fox News.

But the president and his allies have denied he made the remarks.

Veterans’ groups were among those who attacked the president over the reports.

Progressive group VoteVets posted a video of families whose children were killed in action. “You don’t know what it is to sacrifice,” says one.

Paul Rieckhoff of the Iraq & Afghanistan Veterans of America, tweeted: “Who is really surprised by this?”

Analysts say the comments could prove damaging with the president needing support from military voters as he bids for re-election.

According to The Atlantic, Mr Trump cancelled a visit to a US cemetery outside Paris in 2018 because he said it was “filled with losers”.

Four sources told the magazine he rejected the idea of visiting because the rain would dishevel his hair, and he did not believe it important to honour America’s war dead.

During the same trip, the president also allegedly referred to 1,800 US soldiers who died at Belleau Wood as “suckers”. The battle helped to prevent a German advance on Paris during World War One and is venerated by the US Marine Corps.

In 2018 the White House said the visit was cancelled because bad weather had grounded the president’s helicopter. This account was backed up in a recent book by President Trump’s former National Security Adviser John Bolton, who has been a vocal critic of Mr Trump.

The Atlantic’s reporting was based on anonymous sources but the Associated Press said it had independently confirmed many of the remarks. A Fox News correspondent said she had corroborated some of the remarks.

On top of the comments from veterans, President Trump’s challenger in November’s presidential election, Joe Biden, responded by saying his rival was “unfit” to lead.

“If the article is true – and it appears to be, based on other things he’s said – it is absolutely damning. It is a disgrace.”

Democratic Senator Tammy Duckworth, a veteran who lost both legs while serving in Iraq, said President Trump “liked to use the US military for his own ego”.

Khizr Khan, the father of a US soldier killed in Iraq who criticised Mr Trump during the 2016 Democratic convention, joined Ms Duckworth on the call.

He said: “When Donald Trump calls anyone who places their lives in service of others a loser, we understand Trump’s soul.”

President Trump has pushed back hard against the reports, calling them “fake news”.

“To think that I would make statements negative to our military and our fallen heroes when nobody’s done what I’ve done with the budgets, with the military budgets, with getting pay raises for our military,” he said. “It is a disgraceful situation by a magazine that’s a terrible magazine.”

Speaking to reporters on Friday, he suggested the source of the story was his former White House chief of staff, John Kelly. Mr Trump said the former US Marine general “was unable to handle the pressure of this job”.

Secretary of State Mike Pompeo told Fox News on Friday morning he was with the president for a good part of the trip to France and never heard him use the words described in the article.

Defense Secretary Mark Esper was quoted by Politico as saying Mr Trump had “the highest respect and admiration for our nation’s military members, veterans and families”, though the Pentagon chief did not explicitly deny the story.

Another former White House chief of staff, Mick Mulvaney, and former press secretary Sarah Huckabee Sanders were among those in Mr Trump’s orbit who rejected the story as false.