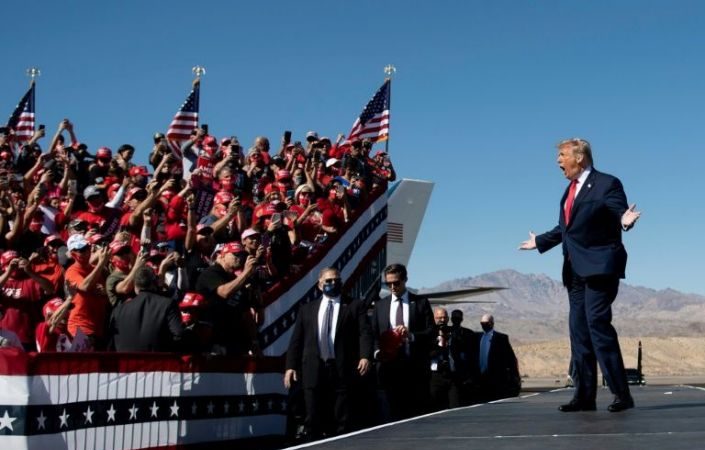 US President Donald Trump has pressed the Republican governor of Georgia to help overturn Joe Biden’s election victory in the state.

In a series of tweets, he urged governor Brian Kemp to call a special session of the state legislature.

The president is still refusing to concede and alleges, without evidence, that Mr Biden’s win was due to fraud.

He has launched legal challenges in several states but so far almost all of them have failed.

Georgia was a key battleground state in the election and Joe Biden’s narrow win – the first time the state had voted Democrat since 1992 – helped to seal his victory.

It is now the focus of an intense political battle for control of the Senate. If Democrats win January’s two runoff elections there, Republicans would lose control of the upper house.

According to the Washington Post, Mr Trump called Mr Kemp on Saturday morning and asked him to demand an audit of absentee ballot signatures. Mr Kemp – who has no power to order such an audit – turned down the requests, a source told the newspaper.

Mr Trump has alleged throughout the election that the increase in postal ballots had led to widespread fraud, but there has been no evidence of this.

Then on Twitter, the president turned up the pressure on the governor, saying: “I will easily & quickly win Georgia if Governor @BrianKempGA or the Secretary of State permit a simple signature verification … Why are these two ‘Republicans’ saying no?”

Mr Kemp tweeted back that he had “publicly called for a signature audit three times” to which Trump responded: “Your people are refusing to do what you ask. What are they hiding?”

He added: “At least immediately ask for a Special Session of the Legislature. That you can easily, and immediately, do.”

Later, Mr Trump again took aim at Mr Kemp when he addressed supporters in Valdosta, Georgia – his first post-election campaign rally – saying the governor had to “get a lot tougher”.

Georgia’s Secretary of State Brad Raffensperger, a Republican, said on Wednesday that no evidence of widespread fraud had been found to support Mr Trump’s claims.

An election official in the state, Gabriel Sterling, also a Republican, has urged the president to turn down his fraud claims, saying they were inciting violent threats.

Mr Biden won the election with 306 votes in the electoral college – the system the US uses to elect a president – to Mr Trump’s 232. The college will meet on 14 December to formalise the outcome.

The state has two separate Senate races under way ahead of runoff elections on 5 January and both have a Republican incumbent squaring off against a Democratic newcomer.

Senator Kelly Loeffler, 50, is facing off with Reverend Raphael Warnock, 51, a senior pastor at an Atlanta Baptist Church.

Recent polls show Mr Warnock pulling ahead of Ms Loeffler and the Perdue-Ossoff race in a dead heat.

Mr Trump’s Republican party currently has a slim majority in the upper chamber, and a victory in the run-offs would allow it to counter the Democratic administration of President-elect Biden.

However, if the Democrats win the two remaining seats, they would control half the seats in the Senate – and the vice-president would be able to act as a tie-breaker.

The Democrats already control the lower chamber – the House of Representatives.