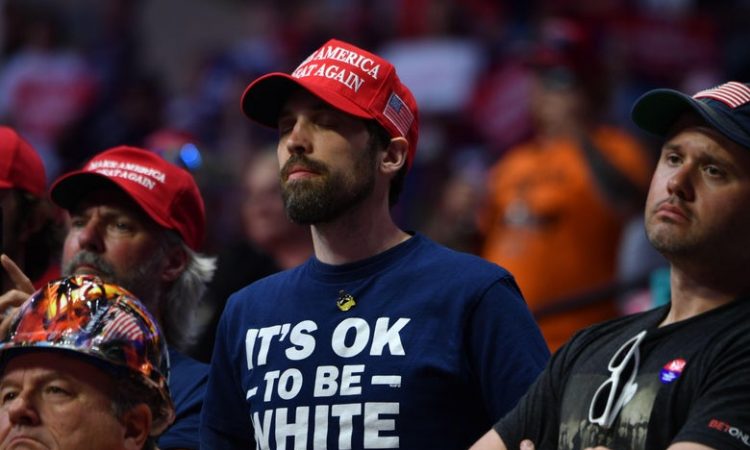 The supporter was among a group of senior citizens taking part in a pro-Trump rally at a retirement complex in Florida.

The footage showed the Trump supporters and anti-Trump demonstrators hurling abuse and swearing at one another.

President Trump has repeatedly been accused of inflaming racial tensions – accusations he denies.

In his tweet, the president thanked “the great people of The Villages” – referring to the retirement community north-west of Orlando where the rally took place. “The Radical Left Do Nothing Democrats will Fall in the Fall. Corrupt Joe is shot. See you soon!!!,” he wrote.

The video included in the tweet showed a Trump supporter in a golf cart raising a clenched fist and shouting “white power”. He appeared to be responding to a protester calling him a racist and using profanities. Other anti-Trump protesters shouted “Nazi” and other accusations at the rally-goers.

Tim Scott, the only black Republican in the US Senate, said in an interview with CNN on Sunday that the video was “offensive” and should be taken down.

“There’s no question that he should not have retweeted it and he should just take it down,” Mr Scott told the network.

The US Secretary of Health and Human Services, Alex Azar, was also asked about the tweet in an appearance on CNN.

“I’ve not seen that video or that tweet, but obviously neither the president, his administration nor I would do anything to be supportive of white supremacy or anything that would support discrimination of any kind,” Mr Azar said.

It was not clear if the president was aware that the supporter in the video was shouting a white supremacist slogan.

President Trump has previously faced accusations of sharing or promoting racist content. In 2017 he retweeted three inflammatory videos from a British far-right group, prompting a rebuke from then UK Prime Minister Theresa May.

He was widely criticised in 2019 when he said in a tweet that four US congresswomen – Alexandria Ocasio-Cortez, Rashida Tlaib, Ayanna Pressley and Ilhan Omar – should “go back and help fix the totally broken and crime-infested places from which they came”. Three of the four congresswomen were born in the US and all four are US citizens.

In response to protests in recent weeks over the death of George Floyd, Trump warned on Twitter that “when the looting starts, the shooting starts” – a phrase used by Miami’s confrontational police chief Walter Headley at the height of the civil rights movement in 1967.

The line prompted Twitter to restrict the president’s tweet on the basis that it broke the platform’s rules on glorifying violence.

And Mr Trump has faced accusations of racism in recent weeks for repeatedly using the phrase “kung-flu” to describe the coronavirus. The White House has denied president’s use of the term is racist.

“What the president does is point to the fact that the origin of the virus is China,” said White House Press Secretary Kayleigh McEnany.