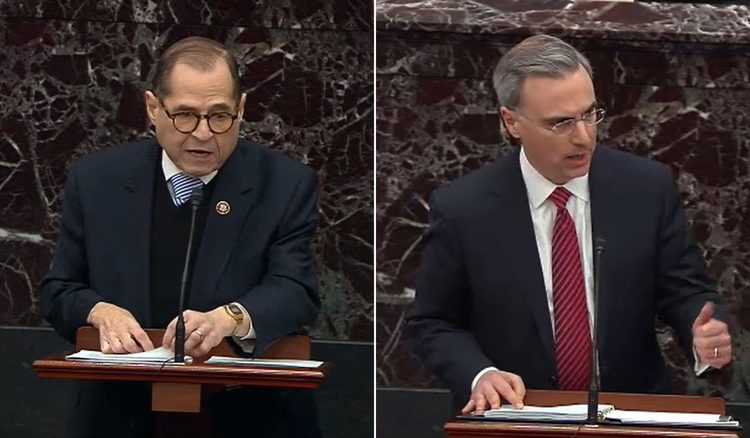 Lead House impeachment manager Adam Schiff called dramatically for the Senate to remove President Donald Trump from office Thursday, saying the US leader cannot be trusted to put the country’s interests ahead of his own.

“The American people deserve a president they can count on, to put their interest first,” said Schiff.

His impassioned words capped a long day in which Democrats detailed Trump’s illicit scheme to pressure Ukraine to help his 2020 reelection campaign.

“You know, you can’t trust this president to do what is right for this country. You can trust he will do what’s right for Donald Trump,” Schiff added.

“He’ll do it now. He’s done it before. He’ll do it for the next several months. He’ll do it in the election if he’s allowed to. This is why, if you find him guilty, you must find that he should be removed.”

“Because right matters. And truth matters. Otherwise we are lost.”

As the 100 senators sat as jurors and millions of Americans watched on television, House impeachment managers mustered scores of videos, internal documents and extensive witness testimony to lay out a strong case that the US leader abused his powers.

“President Trump used the powers of his office to solicit a foreign nation to interfere in our elections for his own personal benefit,” House Judiciary Committee Chair Jerry Nadler told the chamber.

“Since President George Washington took office in 1789, no president has abused his power in this way,” Nadler said.

“The president has repeatedly, flagrantly, violated his oath… The president’s conduct is wrong. It is illegal. And it is dangerous.”

Over nine hours the Democrats methodically dismantled Republican claims that Trump did nothing wrong.

They left few doubts that Trump’s sole motivation in secretly freezing aid to Ukraine last July was to force Ukraine President Volodymyr Zelensky to announce one investigation into Biden and a second into an unsupported story that Kiev helped Democrats in the 2016 election.

To puncture a key White House argument that the US constitution requires a specific crime to remove a president, they played old videos in which two of Trump’s closest defenders, Republican Senator Lindsey Graham and storied criminal defense attorney Alan Dershowitz, said that abuse of power itself is a clear impeachable offense.

And they detailed the extensive role of Trump’s personal lawyer Rudy Giuliani in the scheme to pressure Zelensky, even while US intelligence and diplomatic chiefs disagreed with it.