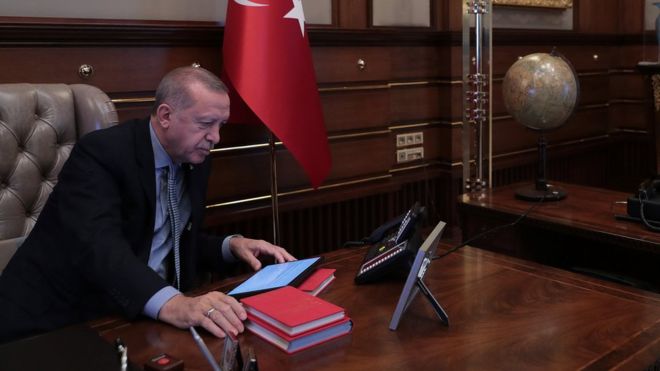 Turkish President Recep Tayyip Erdogan put US President Donald Trump’s letter “in the bin”, the BBC has been told.

In the letter dated 9 October, and sent after US troops were pulled out of Syria, Mr Trump told Mr Erdogan: “Don’t be a tough guy. Don’t be a fool!”

Turkish presidential sources told the BBC that the letter was “thoroughly rejected” by Mr Erdogan.

On the day the letter was received, Turkey launched a cross-border offensive against Kurdish-led forces.

In response, Turkish presidential sources said: “President Erdogan received the letter, thoroughly rejected it and put it in the bin.” President Trump has faced intense criticism for the withdrawal of troops, which critics say gave Turkey the green light to launch the military attack.

Earlier on Wednesday, President Trump said the US should not be intervening in Turkey’s military operation in Syria because it is “not our border”, and called the former US allies the Kurds “no angels”.

Turkish troops and allied Syrian rebels launched the offensive in northern Syria last week to push back from the border members of a Syrian Kurdish militia, called the People’s Protection Units (YPG), and to create a “safe zone” where up to two million Syrian refugees can be resettled.

Kurdish-led forces have been a critical ally of the US in the fight against the Islamic State (IS) group in Syria and there are fears the destabilisation could lead to a jihadist resurgence.