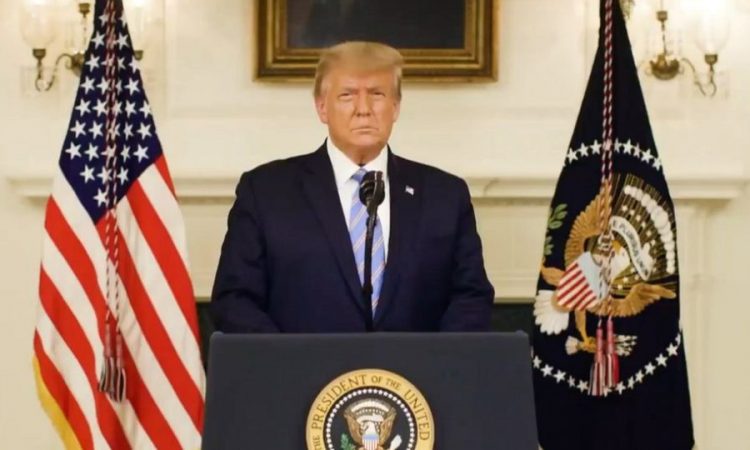 US President Donald Trump has been permanently suspended from Twitter “due to the risk of further incitement of violence”, the company says.

It comes amid a Big Tech purge of the online platforms used by Mr Trump and his supporters.

Some lawmakers and celebrities have been calling for years on Twitter to ban Mr Trump altogether.

Mr Trump was locked out of his account for 12 hours on Wednesday after he called the people who stormed the US Capitol “patriots”.

Hundreds of his supporters entered the complex as the US Congress attempted to certify Joe Biden’s victory in the presidential election. The ensuing violence led to the deaths of four civilians and a police officer.

Twitter warned then that it would ban Mr Trump “permanently” if he breached the platform’s rules again.

After being allowed back on Twitter, Mr Trump posted two tweets on Friday that the company cited as the finals straws.

In one, he wrote: “The 75,000,000 great American Patriots who voted for me, AMERICA FIRST, and MAKE AMERICA GREAT AGAIN, will have a GIANT VOICE long into the future. They will not be disrespected or treated unfairly in any way, shape or form!!!”

Twitter said this tweet “is being interpreted as further indication that President Trump does not plan to facilitate an ‘orderly transition'”.

In the next, the president tweeted: “To all of those who have asked, I will not be going to the Inauguration on January 20th.”

Twitter said this was “being received by a number of his supporters as further confirmation that the election was not legitimate”.

After Twitter had permanently suspended his @realDonaldTrump account, Mr Trump tweeted from the US president’s official @Potus account suggesting he would “look at the possibilities of building out our own platform in the future” and railing against Twitter.

But the tweets were removed from the platform as soon as they were posted.

Later in the day, Google suspended Parler – a self-styled “free speech” rival to Twitter that is increasingly popular with Trump supporters – from its online store.

“We’re aware of continued posting in the Parler app that seeks to incite ongoing violence in the US,” said Google.

On Thursday, Facebook said it had suspended Mr Trump “indefinitely”. The popular gaming platform Twitch also placed an indefinite ban on the outgoing president’s channel, which he has used for rally broadcasts. So has Snapchat.