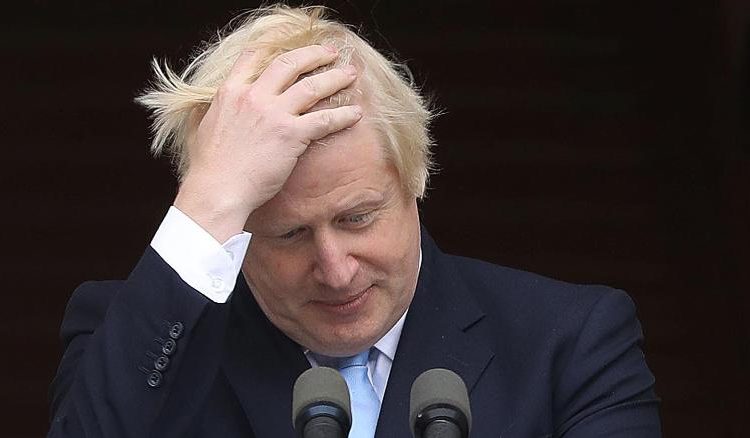 Britain's Prime Minister Boris Johnson gestures during a press conference on the steps of the Government buildings in Dublin on September 9, 2019. - Irish Prime Minister Leo Varadkar said on Monday that the European Union had not received from Britain any alternatives to the so-called backstop provision in the Brexit divorce deal. (Photo by Lorraine O'SULLIVAN / AFP) (Photo credit should read LORRAINE O'SULLIVAN/AFP/Getty Images)
187views

Prime Minister Boris Johnson on Tuesday vowed to press ahead with his plans for Brexit on October 31 despite a momentous Supreme Court ruling that found his decision to suspend parliament unlawful.

The ruling is a huge blow to Johnson’s authority, coming after a series of defeats in parliament that have curbed his plans to leave the European Union even if there is no divorce deal with Brussels.

The Speaker of the House of Commons, John Bercow, immediately announced that MPs would reconvene on Wednesday.

The Conservative leader, who is currently in New York, told British media he “strongly disagreed” with the decision but said he would respect it.

Johnson also renewed his call for an early election to end the stand-off with parliament.

He said it was “the obvious thing to do”.

Johnson had argued that shutting down parliament until October 14 was a routine move to allow his new government to set out a new legislative programme.

But critics accused him of trying to silence MPs.

She said this was “because it had the effect of frustrating or preventing the ability of parliament to carry out its constitutional functions”.

As a result, the suspension was “void and of no effect”, Hale said, adding: “Parliament has not been prorogued.”

The judge instantly became a social media sensation thanks to the large spider brooch she was wearing as she issued her strongly-worded condemnation of government policy.

Bercow subsequently announced that he would reconvene the Commons at 11.30 am (1030 GMT) on Wednesday morning, while the upper House of Lords said it would return the same day.

The judges “have vindicated the right and duty of parliament to meet at this crucial time to scrutinise the executive”, Bercow said.

A small group of protesters outside the court hailed the decision, with one, Gareth Daniels, telling AFP: “This is a great day for democracy.”