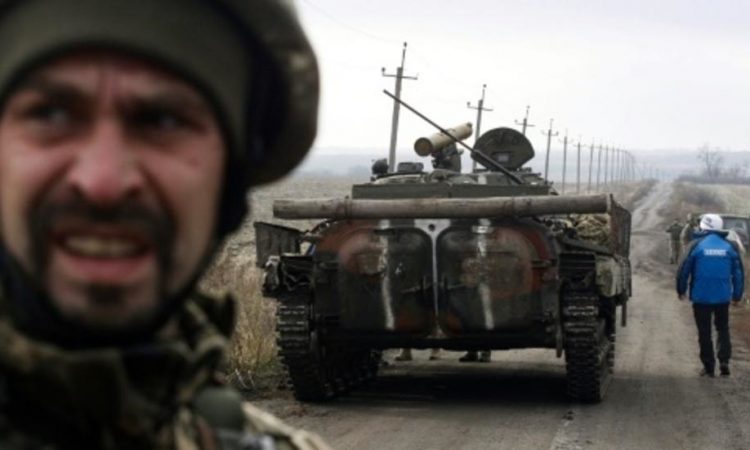 The Ukrainian army and Moscow-backed separatists on Saturday launched the last phase of a troop pullback ahead of a high-stakes summit with Russia.

The long-awaited withdrawal of troops in the conflict-riven Donetsk and Lugansk regions is a precondition for the first face-to-face talks between Russian President Vladimir Putin and his Ukrainian counterpart Volodymyr Zelensky.

The Paris summit, whose date has yet to be confirmed, will be mediated by the leaders of France and Germany.

“The disengagement of troops and weaponry has begun” between the villages of Petrivske in the separatist-controlled zone and Bogdanivka in Kiev-controlled territory in the Donetsk region, said a senior Ukrainian army representative, Bogdan Bondar.

OSCE monitors confirmed the start of the withdrawal added that they “would continue to monitor and verify the disengagement process.”

The warring sides signalled their intention to withdraw by firing flares.

Bondar said the withdrawal would be completed in three days, followed by mine clearance and other activities which will last 25 days.

The warring sides held a similar pullback in the Lugansk region in October.

Since coming to power in May, Ukraine’s 41-year-old comedian-turned-president has sought to establish dialogue with Russian strongman Putin and revive a peace process to end a five-year-old separatist conflict that has claimed some 13,000 lives.

“The Normandy format aims to renew dialogue, which can bring us closer to the complete end of the war,” Zelensky said this week, referring to the four-way talks.

But the summit has been repeatedly postponed for a number of reasons, including the failure of earlier attempts to disengage forces.

The withdrawal of troops would be the “final precondition” for organising the four-way summit, Ukrainian Foreign Minister Vadym Prystaiko said this week.

He has expressed hope that the meeting, the first at such a high level since 2016, could take place in Paris in November.

But many political observers remain sceptical, saying that the Kremlin could come up with yet more conditions.

However he noted that Russia also wanted experts to agree in advance on the wording of a document that will be adopted as a result of the Normandy talks.

“There are a number of disputed positions between Ukraine and Russia which will be hard to agree on,” Fesenko said.

Russia has said it backs a new summit but has refused to commit to a timetable.

“We want to hold the summit as soon as possible, but at the same time we consider this summit has to be well organised to ensure it gets the necessary results,” Kremlin spokesman Dmitry Peskov has said.

He added it was “too early to say” whether the meeting could take place this year because “many questions” remained unresolved.

Zelensky’s peace plan including the troop pullback has been strongly criticised by many in Kiev, especially war veterans and nationalists.

In the run-up to the planned summit, Ukrainian, Russian and separatist negotiators also agreed on a roadmap that envisages a special status for the separatist territories if they conduct free and fair elections under the Ukrainian constitution.