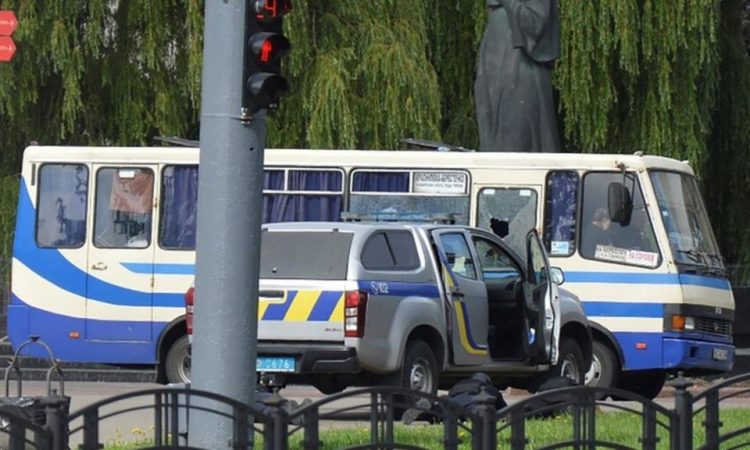 A stand-off in Ukraine has ended with security forces freeing 13 hostages from a bus and detaining the gunman after hours of talks, officials say.

Pictures showed the gunman lying on the ground after his arrest in the city of Lutsk, while video footage showed the hostages leaving the bus.

The man had originally been holding 16 people but released three shortly before officers moved in.

All the hostages are said to be unharmed.

The man has been named by police as Maksym Kryvosh, 44, who has previous convictions.

Police earlier said they had come under fire and a grenade was thrown, although it did not explode.

One of the gunman’s demands was that senior politicians state they are terrorists.

“Lutsk. Everyone is okay,” Interior Minister Arsen Avakov tweeted (in Russian) following the end of the siege.

Mr Avakov was in Lutsk to lead negotiations with the gunman.

Ukrainian President Volodymyr Zelensky also held talks with the hostage-taker, which his spokeswoman Yuliya Mendel said had led to the release of the first three hostages.

Mr Zelensky posted a brief video on his Facebook page in which he said in Russian the words: “Everyone should watch the 2005 film Earthlings.” Another of the demands of the hostage-taker had been for the president to encourage people to watch the Hollywood-made animal rights documentary.

However, he deleted the video after the siege ended.

Earlier, pictures from the scene showed officers of the counter-terrorism SBU security services surrounding the bus. Police said two shots had been fired from it and the man claimed to also have explosives.

“The attacker threw a grenade from the bus, which, fortunately, did not detonate,” a statement said.

According to the prosecutor general’s office, the gunman said he had placed an explosive device in a public place in the city that could be detonated remotely.

Police cordoned off the city centre and told residents not to leave their homes or offices.

It was not clear whether any device had been found.

Officials said Kryvosh had previously spent around 10 years in prison on convictions including fraud and the illegal handling of weapons.