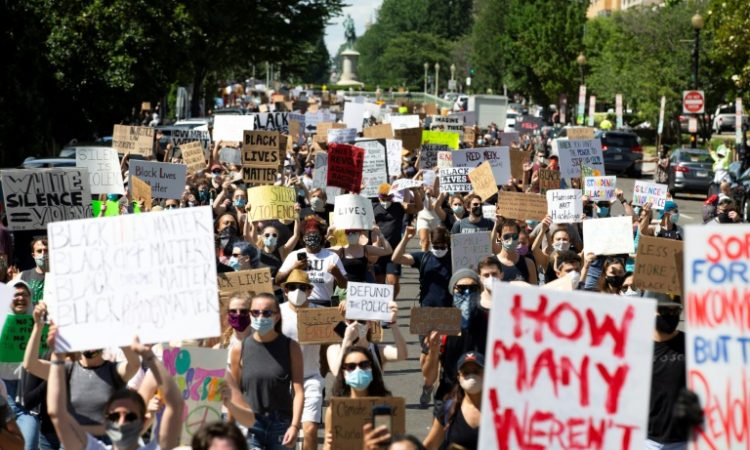 Democrats vowed Sunday to press legislation to fight systemic racism in US law enforcement as the battle for change triggered by the police killing of George Floyd began shifting from the streets to the political sphere.

After another day of overwhelmingly peaceful protests across the US, President Donald Trump ordered National Guard troops to begin withdrawing from the nation’s capital.

Washington Mayor Muriel Bowser, a Democrat who has jousted with Trump over the use of force in her city, told Fox News there had been no arrests on Saturday despite the massive protests.

Demonstrations continued across the nation Sunday — including in Washington, New York and Winter Park, Florida — as protesters began focusing their initial outrage over the death of the unarmed Floyd into demands for police reform and social justice.

Former Joint Chiefs of Staff chairman Colin Powell joined them Sunday, saying Trump had “drifted away” from the Constitution. Powell, a Republican moderate, said Trump had weakened America’s position around the world and that in November’s presidential election he would support Democrat Joe Biden.

Condoleezza Rice, who succeeded Powell as secretary of state under President George W. Bush, told CBS she would “absolutely” oppose using the military against peaceful protesters, adding, “This isn’t a battlefield.”

But administration officials again defended their approach, with Acting Homeland Security Secretary Chad Wolf telling ABC that Washington had been “a city out of control.”

He credited the decrease in violence to “what the administration has done” and he denied a problem of systemic racism among police.

The Trump administration has proposed no specific policy changes in response to the widespread outrage over Floyd’s death May 25 in Minneapolis, Minnesota, when video captured a white officer kneeling on his neck for nearly nine minutes while Floyd pleaded: “I can’t breathe.”

Members of the Congressional Black Caucus (CBC) said they would introduce legislation in the House of Representatives on Monday to make policing more accountable.

The legislation is expected to make it easier to sue police officers over deadly incidents, to ban the sort of choke holds that led to Floyd’s death, and to establish a national database to record police misconduct.

One member of the caucus, Representative Val Demings of Florida, a former police chief in the city of Orlando, told ABC that “systemic racism is always the ghost in the room.”

“What we have to do as a nation is hold police accountable, provide the necessary oversight to do that, look at training standards, look at use-of-force policies, look at who we are hiring,” said Demings, who has been mentioned as a possible Biden running mate.

US Attorney General William Barr said Sunday that he disagreed with any move to lessen the considerable legal immunity police officers enjoy.

“I don’t think you need to reduce immunity to go after the bad cops, because that would result certainly in police pulling back” from necessary enforcement duties, he told CBS.

Some jurisdictions have moved already to embrace reforms — starting with bans on the use of tear gas and rubber bullets against protesters.

New York Mayor Bill de Blasio told reporters Sunday that he would cut the city’s police budget and shift some funds to youth and social services, local media reported. He did not say how much money was involved.

Trump himself, seizing on the call by some protesters to slash police funding, went on the attack against Biden, tweeting without evidence that “not only will Sleepy Joe

Biden DEFUND THE POLICE, but he will DEFUND OUR MILITARY!”

Biden, who has accused Trump of fanning “the flames of hate,” plans to travel to Houston on Monday to visit with Floyd’s family. He will also record a message to be read at Floyd’s funeral on Tuesday.

Barr again defended the use of force to clear a square near the White House ahead of a Trump photo op, insisting — despite contradictory witness accounts — that protesters had thrown bricks.

He also denied media reports that the president at one point had demanded that 10,000 active-duty troops be deployed in American cities to crack down on the unrest.US

“The president never asked or suggested that we needed to deploy regular troops at that point,” he said.