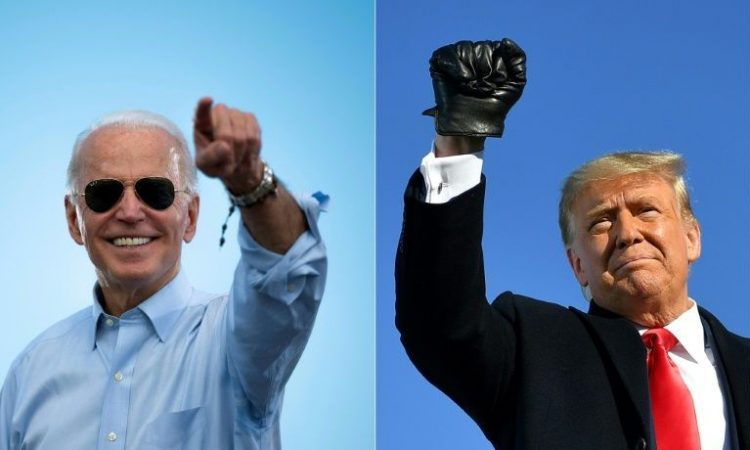 Americans are voting in one of the most divisive presidential polls in decades, pitting incumbent Republican Donald Trump against Democrat Joe Biden.

Polls have opened across the country after a long and bitter campaign amid the coronavirus pandemic.

More than 100 million people have already cast their ballots in early voting, putting the country on course for its highest turnout in a century.

Both rivals spent the final hours of the race rallying in key swing states.

National polls give a firm lead to Mr Biden, but it is a closer race in the states that could decide the outcome.

In the US election, voters decide state-level contests rather than an overall, single, national one.

Both candidates are using election day as an opportunity to drive home the messages they have been hammering to voters for the last few weeks. The two rivals have radically different policies on several key issues. They have clashed bitterly during the campaign over how to handle the Covid-19 pandemic, and how to best handle the economy during this difficult period.

Mr Biden has accused Mr Trump of a haphazard response to the pandemic that he says has needlessly cost too many lives. But Mr Trump has downplayed the impact of Covid-19, saying the country is “rounding the corner”.

Earlier on Tuesday, Mr Trump, sounding a little hoarse, spoke to Fox News by phone, saying he felt good about his chances of victory and predicting he would win “big” in key states such as Florida and Arizona.

“I think we have a really solid chance of winning,” he said. Asked when he would declare victory, he added: “When there’s victory. If there’s victory… there’s no reason to play games.”

Joe Biden visited his childhood home in Scranton in Pennsylvania – a key swing state – and addressed a crowd in the town, saying: “We’ve got to restore the backbone to this country. The middle class built this country – Wall Street didn’t.”

How will the election work?

To be elected president, a candidate must win at least 270 votes in what is called the electoral college. Each US state gets a certain number of votes partly based on its population and there are a total of 538 up for grabs.

This system explains why it is possible for a candidate to win the most votes nationally – as Hillary Clinton did in 2016 – but still lose the election.

Control of the Senate is also at stake in these elections, with the Democrats seeking to gain control of both houses of Congress and the White House for the first time since early in Barack Obama’s first term.

Coronavirus has at times overshadowed the election campaign, with the pandemic in the US worsening over the final weeks of the race. The country has recorded more cases and more deaths than anywhere else in the world, and fear of infection has contributed to an unprecedented surge in early and postal voting.

There are fears that pockets of post-election violence could break out as the results come in.

A new “non-scalable” fence has been put up around the White House in Washington DC. Businesses in the nation’s capital and also in New York City have been seen boarding up their premises due to concerns about unrest.

In the last hours of the campaign, Twitter and Facebook labelled a post by President Trump as “misleading”, after he claimed that postal ballots in Pennsylvania could lead to rampant fraud. The social media giants also added a link to a website explaining why mail-in votes were safe.

The US Supreme Court ruled Pennsylvania could count postal ballots received three days after the election. Mr Trump and his campaign indicated they would sue to block the move.

Legal fights over ballots have also been unfolding in Minnesota, North Carolina and Texas.