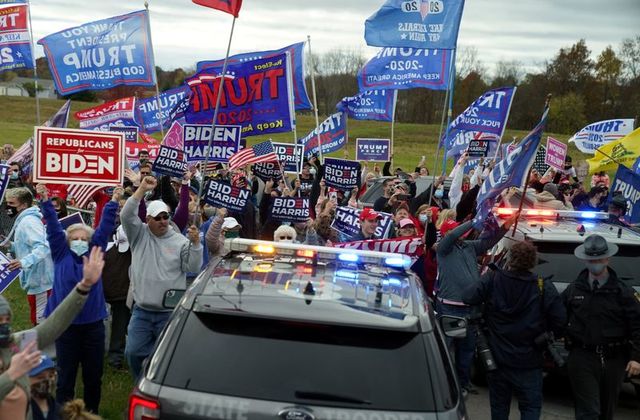 Donald Trump and Joe Biden have been travelling across the nation as the US election race enters its final hours.

Mr Biden, a former vice-president, has a healthy national lead in the latest polls ahead of Tuesday’s election.

But his advantage is narrower in key states which could decide the result.

More than 90 million people have already cast their ballots in early voting, putting the country on course for its highest turnout in a century.

n the US election, voters decide state-level contests rather than a overall single national one.

To be elected US president, a candidate must win at least 270 votes in what’s called the electoral college. Each US state gets a certain number of votes partly based on its population and there are a total of 538 up for grabs.

This system explain why it’s possible for a candidate to win the most votes nationally – like Hillary Clinton did in 2016 – but still lose the election.

Tuesday’s vote comes amid the ongoing coronavirus pandemic. The US has recorded more cases and more deaths than any other country worldwide, reporting more than 81,000 new infections on Sunday alone. President Trump had a punishing schedule on Sunday, holding rallies in Iowa, Michigan, North Carolina and Georgia, and later in Florida.

In Michigan, Mr Trump boasted his leadership the state’s car manufacturing industry had been revived.

“The economy is now growing at the fastest rate ever recorded,” he claimed.

The US economy saw record-breaking 33% growth in the third financial quarter of this year, following a record 31% contraction in the second. But economists warn the damage inflicted by the pandemic – the biggest decline in the US economy in more than 80 years – could still take years to overcome.

At a later rally in Iowa, Mr Trump promised secure borders and more conservative judges in the courts. Addressing Covid-19, he told supporters they had a choice between a “deadly Biden lockdown” or “a safe vaccine that ends the pandemic”.

At a rally in Philadelphia, Mr Biden addressed the city’s black community, vowing to confront “systemic racism” in the US and attacking the president’s handling of the pandemic – something which has disproportionately affected African Americans.

“It’s almost criminal the way he’s handled it,” he said. “It’s a mass casualty event in the black community and it’s totally unnecessary.”

Mr Biden earlier courted Latino voters with a tweet in Spanish, speaking of the separation of migrant families at the border and Mr Trump’s “indifference” to the suffering of Puerto Rico after Hurricane Maria struck in 2017.

Mr Biden’s campaign said he and his running mate Kamala Harris would “fan out” to “all four corners” of Pennsylvania on Monday, joined by their partners and the pop stars Lady Gaga and John Legend.