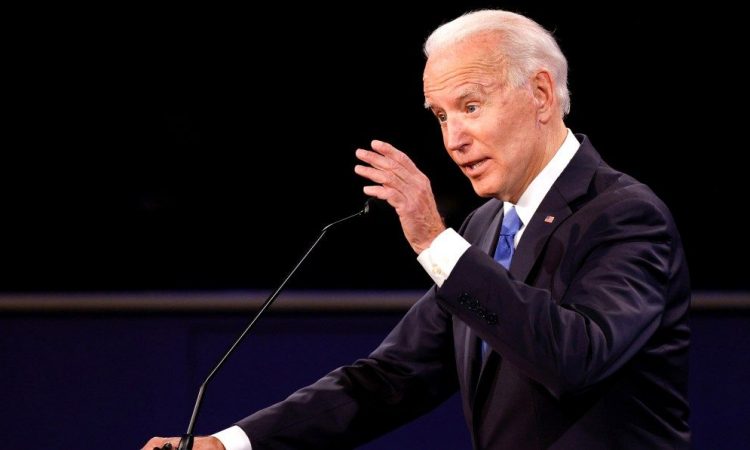 US President Donald Trump has seized on a TV debate remark by his White House rival Joe Biden about shutting down the oil industry, as the Democrat scrambled to clear up the confusion.

Biden aides said he had been talking about ending fossil fuel subsidies, not the industry itself, when he spoke of a “transition” from oil.

But the margin is narrower in a handful of states that could vote either way and ultimately decide the race on 3 November.

More than 53 million Americans have already voted in person or by post in a record-breaking turnout driven largely by the coronavirus pandemic.

In the final moments of Thursday night’s primetime showdown in Nashville, Mr Trump asked his challenger: “Would you close down the oil industry?”

Mr Biden said fossil fuels had to be replaced by renewable energy over time with the US moving towards net zero emissions.

Democrats from the left of the party are enthused by the idea of the US ending its reliance on oil and gas as part of the fight against climate change.

But such a policy could turn off working-class voters in politically critical states such as Pennsylvania, Ohio and Texas, where many of the industry’s employees are based.

The Democrat’s aides released a statement following the debate saying Mr Biden planned to phase out taxpayer subsidies for fossil fuel companies, not the industry altogether.

After the TV duel, Mr Biden himself sought to clarify his remarks by saying fossil fuels would not be eliminated until 2050.

His vice-presidential running mate, Kamala Harris, addressed the controversy on Friday while on the campaign trail in the US state of Georgia.

“Let’s be really clear about this,” said the California senator. “Joe Biden is not going to ban fracking. He is going to deal with the oil subsidies.

“You know, the president likes to take everything out of context.

“But let’s be clear, what Joe was talking about was banning subsidies, but he will not ban fracking in America.”

In the United States it has significantly boosted domestic oil production and driven down gas prices but has prompted concern from environmentalists who want investment to focus on renewable sources of energy.