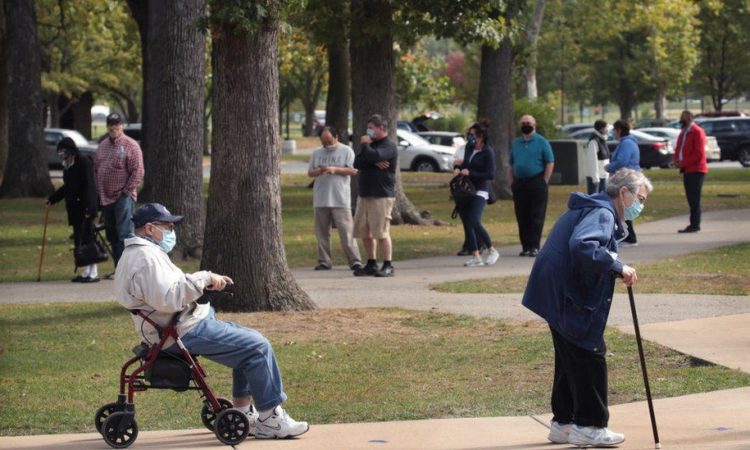 State election officials across the US are reporting record numbers of voters casting their ballots ahead of election day on 3 November.

More than 22m Americans had voted early by Friday, either in person or by mail, according to the US Election Project.

Experts say the surge in early voting correlates to the coronavirus pandemic, which has caused many people to seek alternatives to election day voting.

On Tuesday, Texas, a state that has relatively tight restrictions on who can qualify for postal voting, set a record for most ballots cast on the first day of early voting.

In Ohio, a crucial swing state, more than 2.3m postal ballots have been requested, double the figure in 2016.

Reports indicate that registered Democrats have so far outvoted registered Republicans – casting more than double the number of ballots.

And of these early voting Democrats, women and black Americans are voting in particularly high numbers. Some are motivated by dislike for Donald Trump, while others have been energised by racial justice protests throughout the summer following the police killing of George Floyd in Minnesota.

But this early advantage does not mean that Democrats can already claim victory. Republicans, who claim postal voting is vulnerable to fraud, say Democrats may win the early vote, but that Republicans will show up in large numbers on election day.

The enormous numbers of voters have led to long lines, with some people waiting for up to 11 hours for an opportunity to vote.

Younger people, who historically have been difficult to get to the polls, appear to be turning out in larger numbers this year. The youth vote may be the highest its been since 2008 for the election of Barack Obama – the country’s first black president.

A recent survey by Axios found that four in 10 university students said they planned to protest if Mr Trump wins. Six in 10 said they would shame friends who could vote but choose not to.

By contrast, only 3% of surveyed students said they would protest if Joe Biden was elected.