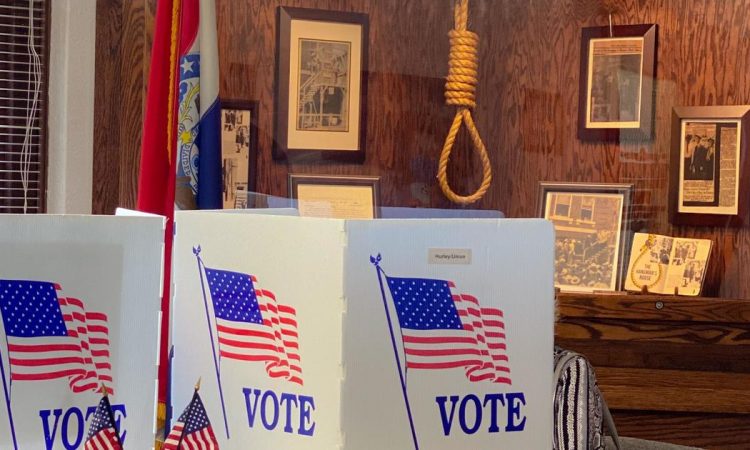 Officials have covered up a noose on display near polling booths in Missouri, after local Democrats argued it could intimidate black voters.

The incident is one of a number of controversial occurrences in the final days of the US election campaign.

Meanwhile a Democratic campaign bus in Texas was encircled by supporters of President Donald Trump, a Republican.

And a rally to promote voting in North Carolina ended with attendants getting pepper-sprayed and arrested.

There are widespread fears across the country of post-election violence, whether the election is won by Mr Trump or his Democrat challenger Joe Biden.

Businesses in downtown Washington DC have been seen in recent days boarding up their premises amid concerns about looting.

Mr Biden currently has a solid lead in opinion polls, but his advantage is narrower in swing states that could decide the election.

Both men have been criss-crossing the country in the final days of the campaign in a last-ditch effort to gain votes.

But more than 85 million people have voted early, 55 million of them by post, setting the country on course for its biggest voter turnout in over a century.

Democrats in Stone County, Missouri, drew attention to a noose in a room containing voting booths, describing it as “clear intimidation” of black voters.

“This symbol’s purpose is to stoke the fires of racial prejudice and strike fear in the hearts of people of colour,” said Missouri party acting chair Clem Smith in a statement, adding that it was a painful reminder of lynchings of black Americans.

It was “offensive, inappropriate and outrageous” and should be taken down, he added.

County official Cindy Elmore said, quoted by the Kansas City Star newspaper, that the noose was a replica and part of a historical exhibit in the county building hosting the voting booths. It had “nothing to do with the election office”, she added.

Ms Elmore said the noose was covered up on Friday morning.

Stone County was the location of Missouri’s last legal hanging in 1937, which is depicted in the exhibit.