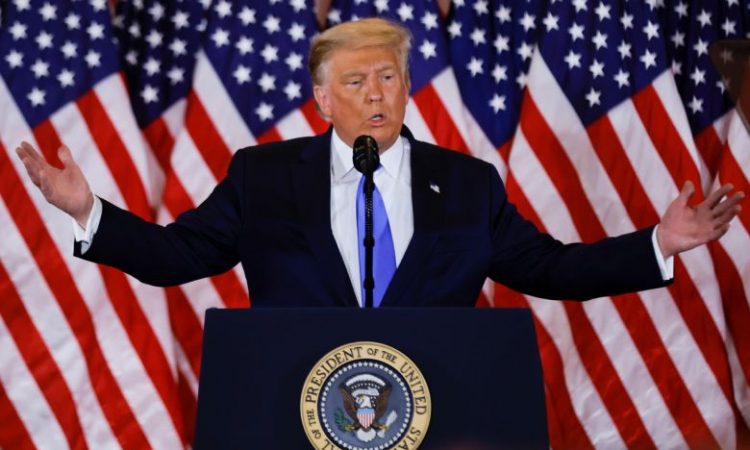 Donald Trump and Joe Biden each claim to be ahead in the US presidential election, even as the final outcome hangs on a razor’s edge and both sides gear up for legal action.

The Trump campaign is challenging vote counts in the key states of Wisconsin, Georgia, Pennsylvania and Michigan.

The BBC projects Mr Biden won Michigan. US media forecast he took Wisconsin. No result has yet emerged in Pennsylvania.

Winning all three of these Rust Belt states would hand Mr Biden victory.

Mr Biden, the Democratic candidate, stopped short of declaring he had won, but said he was confident he was on course to defeat Mr Trump, his Republican rival.

Overall turnout in Tuesday’s election was projected to be the highest in 120 years at 66.9%, according to the US Election Project.

Mr Biden had the support of 70.5 million voters, the most won by any presidential candidate ever. Mr Trump has pulled in 67.2 million votes, four million more than he gained in 2016.

The bitter election race was dominated by the coronavirus pandemic, which hit a new record high of 103,000 daily cases in the US on Wednesday, according to the Covid Tracking Project.

On Wednesday afternoon, Mr Biden told reporters in Wilmington, Delaware: “When the count is finished, we believe we will be the winners.”

“I will govern as an American president. The presidency itself is not a partisan institution.”

He and his running mate Kamala Harris have launched a website for the transition of power, which says that their team “will continue preparing at full speed so that the Biden-Harris Administration can hit the ground running on Day One.”

Mr Biden also said he was feeling “very good” about Pennsylvania, although President Trump’s campaign said it was “declaring victory” in the state on the count of “all legal ballots”.

Senior Trump campaign aide Jason Miller said: “By the end of this week, it will be clear to the entire nation that President Trump and Vice-President Pence will be elected for another four years.”