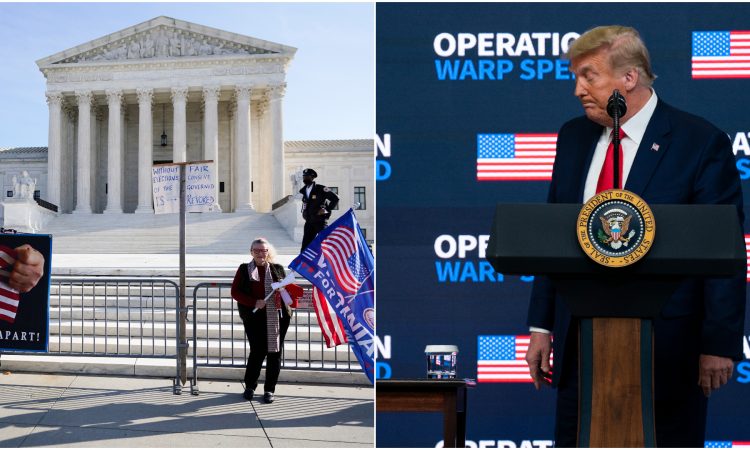 The US Supreme Court has rejected a challenge against President-elect Joe Biden’s victory in Pennsylvania.

Republicans in the state wanted to overturn certification of the result, but justices rejected the request in a one sentence ruling.

It is a blow to President Donald Trump, who has previously suggested without evidence that the election result would be settled in the Supreme Court.

Since then he and his supporters have launched dozens of lawsuits questioning the vote results. None have come close to overturning Mr Biden’s victory.

The Democratic candidate defeated Mr Trump by a margin of 306 to 232 votes in the US electoral college, which chooses the US president. Mr Biden won seven million more votes than the president nationwide.

Pennsylvania’s Governor Tom Wolf has already certified Mr Biden’s victory in the state. Under the rules of the electoral college, the state’s 20 electors will meet on 14 December to officially cast their votes for the president-elect.

Republicans in the state however wanted to overturn Mr Wolf’s certification. The state’s top court had rejected their bid last week, which made them appeal to the US Supreme Court in Washington.

Lawyers for the state and Governor Wolf criticised the case as “fundamentally frivolous”.

“No court has ever issued an order nullifying a governor’s certification of presidential election results,” they wrote.

And on Tuesday the Supreme Court dismissed the suit. The one-sentence ruling did not even cover the Republicans’ allegations, reading simply: “The application for injunctive relief presented to Justice Alito and by him referred to the Court is denied.”

Before, during and after the election, Mr Trump has made unsubstantiated claims of electoral fraud and suggested that the result would eventually be decided in the Supreme Court.

The president appointed three of the court’s justices during his single term in office. Most recently he controversially placed conservative judge Amy Coney Barrett on the bench after the death of the court’s most liberal justice, Ruth Bader Ginsburg, just weeks before the election.