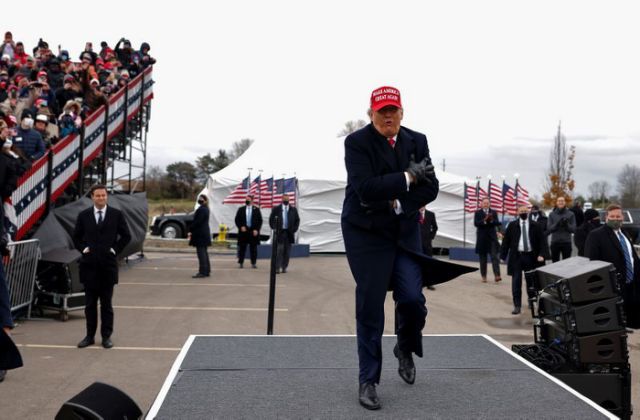 Two days before Election Day, President Donald Trump on Sunday launched a campaign sprint across battleground states starting with Michigan that will be crucial to the outcome of the U.S. election in an effort to defy the polls and fend off Democratic challenger Joe Biden.

Trump, aiming to avoid becoming the first incumbent president to lose a re-election bid since fellow Republican George H.W. Bush in 1992, has a frenetic schedule for Sunday, with stops also planned in Iowa, North Carolina, Georgia and Florida. Biden is due to campaign in Pennsylvania.

Buffeted by snow flurries in Washington, a town north of Detroit, Trump wore his trademark red cap emblazoned with the words “Make America Great Again” as he addressed a boisterous crowd on a cold and blustery morning.

After the crowd loudly chanted, “We love you” Trump responded, “I love you, too. If I didn’t, I wouldn’t be standing here because it’s freezing out here.”

Biden’s national lead in opinion polls has stayed relatively steady in recent months as the coronavirus pandemic has persisted. The former vice president was ahead 51% to 43% in the latest Reuters/Ipsos poll, taken Oct. 27-29.

Trump faces what appears to be a narrow path to re-election. Polls show him close to Biden in enough battleground states that could give him the 270 votes needed to win in the state-by-state Electoral College that determines the overall victor.

Anita Dunn, a Biden campaign adviser, said on CNN’s “State of the Union” program, “We feel confident about where we are.” The Democratic governors of Michigan, Pennsylvania and Wisconsin all said they were upbeat about Biden’s chances in their states. Ohio’s Republican governor predicted Trump would win the state by a couple of percentage points.

There already has been a record-setting number – 93 million, according to the U.S. Elections Project – of early votes cast around the country, either in-person or by mail, a phenomenon expected to boost Biden’s chances. It represents about 68% of the total ballots counted in the 2016 U.S. election.

The contest has proven to be unexpectedly close in Texas, typically a reliable Republican state.

On Monday, responding to a lawsuit brought by plaintiffs including a conservative activist and a Republican state legislator, a federal judge in Houston will hold an emergency hearing on whether Harris County officials unlawfully allowed drive-through voting during the pandemic and should toss more than 100,000 votes in the Democratic-leaning area.

The Trump campaign indicated it is banking on in-person voting on Tuesday to push the president over the top. Campaign adviser Jason Miller said Democrats have spent months stressing the threat posed by the coronavirus pandemic and telling people it is not safe to go to the polls in person.

“Well, guess what? President Trump’s supporters are going to show up on Tuesday. Nothing is going to stop them,” Miller told ABC’s “This Week” program. “I think Democrats are going to look in the rear-view mirror and say, ‘This is probably what cost us the election.’”

Biden, who has made hammering the president’s response to the pandemic a main theme of his speeches, is scheduled to campaign again on Sunday in Pennsylvania, one of the most critical of the battleground states and one that Trump won in his 2016 upset victory over Democrat Hillary Clinton.

Biden began his day at a church in his home state of Delaware. As he entered, anti-abortion and pro-Trump demonstrators told him to repent for the sake of the soul of his late son who is buried at the church.

On Sunday and Monday, Trump is due to stage 10 rallies – five a day – making it the campaign’s busiest stretch. On Monday his campaign has events planned in North Carolina, Pennsylvania and Wisconsin, and two in Michigan.

Trump will close out the two-day swing with a late-night rally on Monday in Grand Rapids, Michigan, the same location where he finished his campaign in 2016. In his unexpected victory four years ago, the wealthy businessman-turned-politician took Michigan, Pennsylvania and Wisconsin, three states that for decades had gone in the Democratic column.

Weighing down Trump is a rising number of coronavirus infections in many parts of the country. The United States has recorded more than 9 million cases, with about 230,000 people dying from COVID-19. Trump, who withstood a personal bout with COVID-19, has played down the virus and has said his opponents are using the pandemic against him.