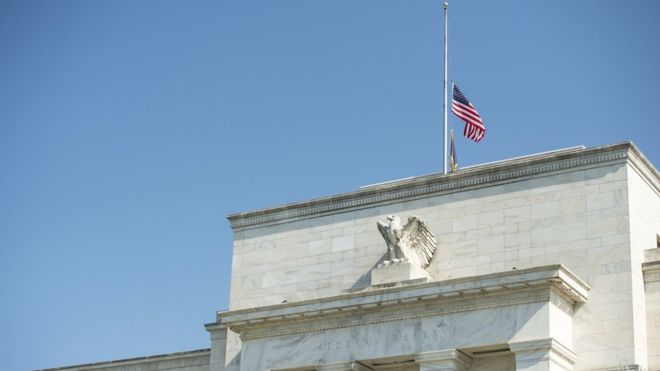 The US central bank has cut interest rates for the second time since 2008 amid concerns about slowing global growth and trade wars.

The bank said the cut is aimed at shoring up the US economy, amid “uncertainties” about future growth.

But officials were divided about the move and about the need for future rises.

Seven members of the Federal Reserve Open Markets Committee, which sets the rates, voted in favour of Wednesday’s cut.

Two members wanted to hold the rate steady, while one wanted to cut further.

Cutting rates – which US President Donald Trump has pushed the Fed to do more aggressively – helps fuel economic activity, by making borrowing money cheaper for businesses and consumers alike.

But with interest rates in the US already low by historic standards – and much of the economic uncertainty caused by White House actions – analysts have raised questions about how much rate cuts will help.

The Fed’s decision to lower rates on Wednesday followed a similar cut in July and marks a reversal from its policy only a year ago, when America’s healthy economy had convinced policy makers to enact a series of small hikes.

But US economic growth slowed to 2% in the second quarter, job creation has slipped and inflation remains lower than US policymakers would like.

In recent days, parts of the financial markets have also shown signs of a cash-crunch, temporarily pushing short-term interest rates above the Fed’s target and prompting the bank to intervene.