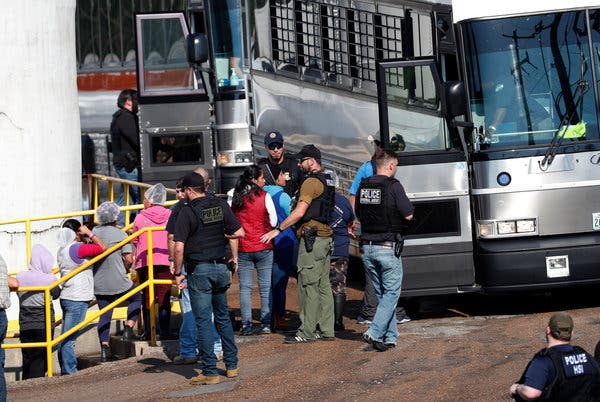 US immigration officials have arrested almost 700 people after a series of raids in the state of Mississippi.

The co-ordinated operations targeted workers at seven agricultural processing plants who allegedly did not have proper documentation.

Videos and photos showed agents arriving in buses to question and arrest the people.

Some children were taken to a local gym after they came home to find their parents gone.

US President Donald Trump announced an immigration crackdown in June, saying “millions of illegal aliens who [had] found their way into the US” would be removed.

About 600 ICE agents arrived at the chicken processing plants, owned by five different companies, in the towns of Bay Springs, Canton, Carthage, Morton, Pelahatchie and Sebastopol.

The agency’s acting director, Matthew Albence, told the Associated Press news agency the raids could be “the largest-ever workplace operation in any single state”.