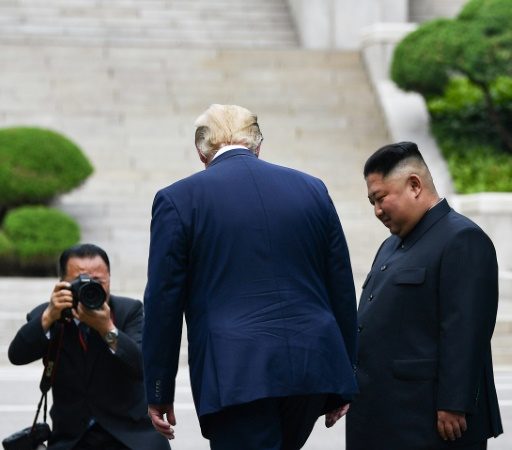 Donald Trump has become the first sitting US president to set foot in North Korea, after meeting Kim Jong-un in the area dividing the two Koreas.

Mr Trump and the North Korean leader posed for handshakes before talking for nearly an hour in the heavily fortified demilitarised zone (DMZ).

Both countries agreed to set up teams to resume stalled nuclear talks.

Their last summit broke down in February with no progress on denuclearisation in North Korea.

Critics have dismissed the occasion – the two leaders’ third face-to-face encounter in just over a year – as a political theatre and say North Korea still needs to show that it is serious in getting rid of its nuclear weapons.

Looking relaxed, Mr Kim crossed into South Korea and alongside Mr Trump said: “I believe this is an expression of his willingness to eliminate all the unfortunate past and open a new future.”

The encounter had initially been described as a brief greeting but Mr Trump and Mr Kim ended up talking for almost an hour in a building known as the Freedom House, on the South Korean side. Speaking next to Mr Trump in a rare statement to the press, Mr Kim said the meeting was a symbol of their “excellent” relationship.

Calling their friendship “particularly great”, Mr Trump – who once referred to Mr Kim as “little rocket man” – said it was a “great day for the world” and that he was “proud to step over the line” between the Koreas.