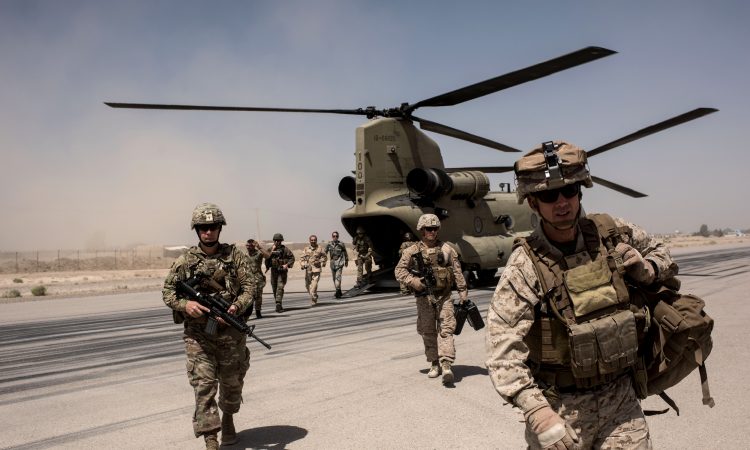 CAMP BOST, AFGHANISTAN - SEPTEMBER 11: U.S. service members walk off a helicopter on the runway at Camp Bost on September 11, 2017 in Helmand Province, Afghanistan. About 300 marines are currently deployed in Helmand Province in a train, advise, and assist role supporting local Afghan security forces. Currently the United States has about 11,000 troops in the deployed in Afghanistan, with a reported 4,000 more expected to arrive in the coming weeks. Last month, President Donald Trump announced his plan for Afghanistan which called for an increase in troop numbers and a new conditions-based approach to the war, getting rid of a timetable for the withdrawal of American forces in the country. (Photo by Andrew Renneisen/Getty Images)
117views

Senior Republicans have voiced their alarm at US plans to withdraw some of its forces in Afghanistan and Iraq.

The US is to cut its number of troops in Afghanistan and Iraq by 2,500, the US Department of Defense confirmed.

President Donald Trump has long called for troops to come home and has criticised US interventions abroad.

He also warned the president against taking “any earthshaking changes in regards to defence and foreign policy” before leaving office.

Mr Trump is yet to concede to Democrat Joe Biden, and the cuts are scheduled to take place five days before Mr Biden takes office on 20 January 2021.

Acting US Defense Secretary Chris Miller said the move reflected Mr Trump’s policy “to bring the wars in Afghanistan and Iraq to a successful and responsible conclusion and to bring our brave service members home”.

Shortly after the announcement, several rockets were fired into the Green Zone in Baghdad and landed near the US embassy. It is the first such attack since Iraqi militias linked to Iran agreed to stop targeting the embassy compound last month. There are no reports of casualties or any damage.

US forces have been in Afghanistan since 2001. A US-led coalition ousted the Taliban weeks after the 11 September 2001 attacks in the US by al-Qaeda, which was then based in Afghanistan.

The Taliban regrouped and became an insurgent force that by 2018 was active in more than two-thirds of the country.

The US started withdrawing troops from Afghanistan as part of a historic peace deal signed by the US and the militants on 29 February.

Military chiefs, including Gen McKenzie, have warned in the past that peace negotiations between the Taliban and Afghan authorities could be undermined by a hasty US withdrawal.

On Tuesday, White House National Security Adviser Robert O’Brien said it was Mr Trump’s hope that “all US troops will be home from Afghanistan and Iraq by May”.

And Senator Ben Sasse, who sits on Senate Intelligence Committee, said it was a “weak retreat” and that it was “not grounded in reality and will make the world a more dangerous place.”

Nato Secretary-General Jen Stoltenberg said on Tuesday that “The price for leaving too soon or in an uncoordinated way could be very high.”

In a statement, he said Afghanistan risked once again becActing US Defense Secretary Chris Miller did not confirm if the drawdown plan

had been endorsed by Gen Mark Milley, chairman of the Joint Chiefs of Staff, but said that military commanders had agreed to execute it.

He said the US had met its goal of defeating extremists and helping “local partners and allies to take the lead in the fight”.oming a platform for international militants to organise attacks.

“We will protect our children from the heavy burden and toll of perpetual war, and we will honour the sacrifices made in the services of peace and stability in Afghanistan, Iraq and around the world,” he said.

At least one Democratic politician supported President Trump’s move. Adam Smith – the chair of the House Armed Services Committee – said it was “the right policy decision”.

“While the history of conflict in the region is complex and predates our direct involvement, after nearly 20 years of armed conflict, Americans and Afghans alike are ready for the violence to end,” he wrote in a statement.