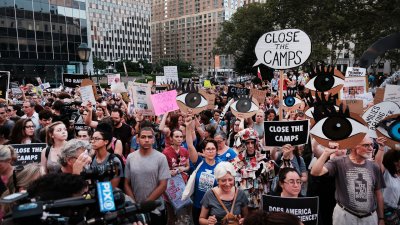 US Vice President Mike Pence visited an overcrowded migrant camp in Texas on Friday, coming face to face with detainees held in horrific conditions and deploring an immigration crisis that he said was “overwhelming our system.”

Pence traveled to the Mexico border as protesters rallied in several US cities urging the government to shut down what they call “concentration camps.”

The vice president visited the McAllen Border Station, where he was taken to a sweltering outdoor portal where 384 men were held in a caged area.

The stench was horrendous, according to media reports from journalists traveling with Pence who were allowed into the area for 90 seconds.

The men, who allegedly crossed the border illegally, were crammed into a space where there was not enough room for all of them to lie down on the concrete floor.

They had no cots, mats or pillows, only silver polyester blankets. Grasping the chain link fencing, they shouted to reporters that they had been there 40 days or longer, were hungry and wanted to brush their teeth.

“To be honest with you, I was not surprised by what I saw,” Pence said afterward. “I knew we would see a system that is overcrowded. It’s overwhelmed and that’s why Congress has to act.”

He has blamed Democrats for precipitating the crisis by resisting President Donald Trump’s push for border funding, as opposition lawmakers split with the administration over how the money should be spent.

Democrats ultimately bowed to pressure last month as Congress approved $4.6 billion in emergency aid to ease the swelling crisis that has seen an influx of migrants flood into the United States, mostly from impoverished Central American countries.

“What’s witnessed here today, and the overcrowding of this border station, and the overall crisis at our border, is that Congress must do more,” Pence said.

Protests took place around the country Friday calling for the closure of the detention facilities.