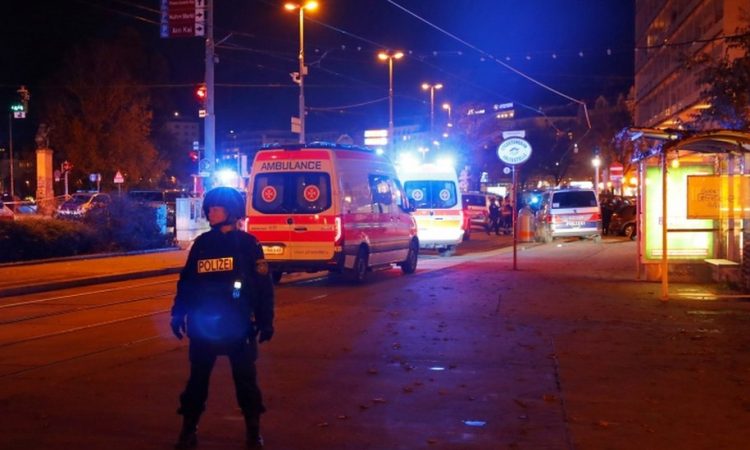 At least one person has been killed and several more are feared dead after shootings in central Vienna, the city’s police say.

Austrian Chancellor Sebastian Kurz called it a “repulsive terror attack” and said one attacker was killed.

A number of suspects armed with rifles launched the assault in six locations, police said.

A large-scale security operation is ongoing as police hunt the attackers.

A number of people, including passers-by, have been taken to hospital with several reported to be seriously injured, Austrian broadcaster ORF reports.

Among the injured was a police officer.

Police said the incident began at the Seitenstettengasse synagogue, which is the main temple in Vienna.

Jewish community leader Oskar Deutsch tweeted that the synagogue was closed at the time the attack began at 20:00 (19:00 GMT).

Footage posted on social media showed people running as what was reported to be gunshots could be heard.

Police have urged people to avoid the area and not to take public transport. Road blocks have been set up around the city centre.

“It sounded like firecrackers, then we realised it was shots,” said one eyewitness quoted by public broadcaster ORF, according to AFP news agency.

Police in neighbouring Czech Republic said they were carrying out checks on passengers and vehicles crossing between the two countries as a preventative measure.

On Twitter, Mr Kurz said: “Our police will act decisively against the perpetrators of this hideous terrorist attack…. We will never allow ourselves to be intimidated by terrorism.”

European leaders have strongly condemned the attack, with French President Emmanuel Macron saying that Europe must not “give up” in the face of attacks.

“We the French people share the shock and grief of the Austrian people, struck this evening by an attack in the heart of their capital, Vienna. After France, a friend of ours is attacked. This is our Europe. Our enemies must know who they are dealing with,” he said.

Three people died in a knife attack in a church in the French city Nice last week in what Mr Macron said was an “Islamist terrorist attack”.