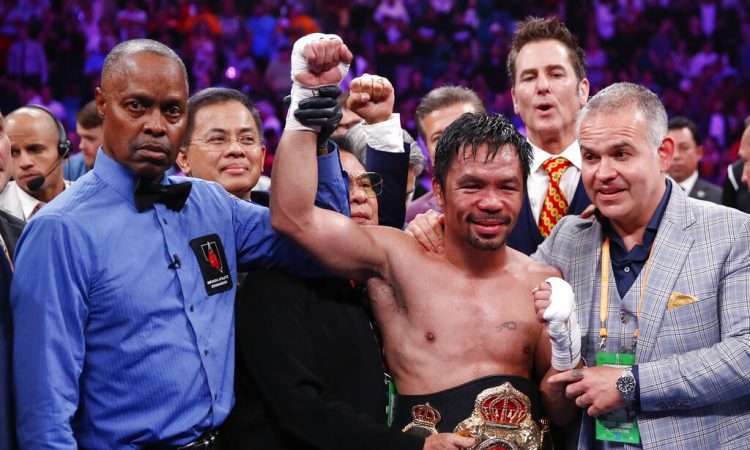 Manny Pacquiao challenged Floyd Mayweather to face him again in the ring on Wednesday as the retired American star taunted the Filipino great about fighting on into his forties.

Pacquiao, 40, who beat Keith Thurman on a split decision at the weekend, bit back at Mayweather on social media after the American accused him of trading on his name.

“You come to my fight and then use my name in a post but I’m the one that is trying to stay relevant? if you want to be relevant again… #MayPac2,” Pacquiao tweeted.

Mayweather, who retired at 40 in 2017 with the unprecedented win-loss record of 50-0, had earlier claimed that Pacquiao’s “entire legacy and career has been built off its association with my name”.

“It’s about time you all stop using my brand for clout chasing and clickbait and let that man’s name hold weight of its own,” he posted on Instagram.

“When we finally fought, I won so easily that everyone had to eat their words!” added Mayweather, alongside a picture of his 2015 defeat of Pacquiao.

But Mayweather, who was ringside in Las Vegas as Pacquiao became the oldest welterweight world champion in boxing history, stayed silent about a rematch as he answered the Filipino in a later post.

“Bottom line, I make more money than you… I beat you mentally, physically and financially!” he wrote.

“Remember, you fight cause you have to, I fight when I want to!”

Mayweather is one of just seven pro fighters to have beaten Pacquiao, the only boxer to have won world titles in eight weight divisions