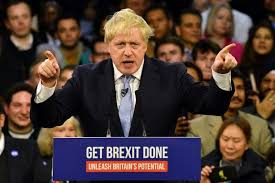 British MPs on Tuesday resume scrutiny of Prime Minister Boris Johnson’s Brexit deal as he races to get it ratified in time for Britain to leave the European Union on January 31.

After his stunning victory in last month’s general election, Johnson is expected to have little trouble getting the legislation enshrining his EU divorce terms through parliament.

But the Conservative leader is still up against the clock, as both the British and European parliaments must ratify the deal before departure day in just a few weeks’ time.

Britons voted in the 2016 referendum to end more than four decades of integration with the EU, but the process has been plagued by political rows over how, when and even whether Britain should leave.

After years of uncertainty that weighed on economic growth, Johnson now looks set to finally make it happen — even if a potentially bigger battle awaits on future ties with the EU.

MPs gave their initial approval to the Withdrawal Agreement Bill in a vote on December 20, a week after Johnson secured a majority of 80 in the 650-seat House of Commons.

Starting on Tuesday, they will have three days of debate before the bill passes to the unelected House of Lords for further scrutiny next week.

Opposition lawmakers and troublesome peers will try to amend the text, but Johnson is virtually certain of getting it through on time.

In a sign of his confidence, his government announced it would hold a new post-Brexit budget vote on March 11, to “seize the opportunities that come from getting Brexit done”.

Both sides are keen to prepare for talks on their future trading relationship, although these cannot start formally until Britain leaves the EU.

The Brexit deal includes a transition period in which ties remain unchanged in practice until December 31, 2020, to provide continuity until a new economic partnership can be agreed.

EU officials — including von der Leyen herself — have warned this is a very tight timeframe, but Johnson insists he will not opt to extend the transition period.