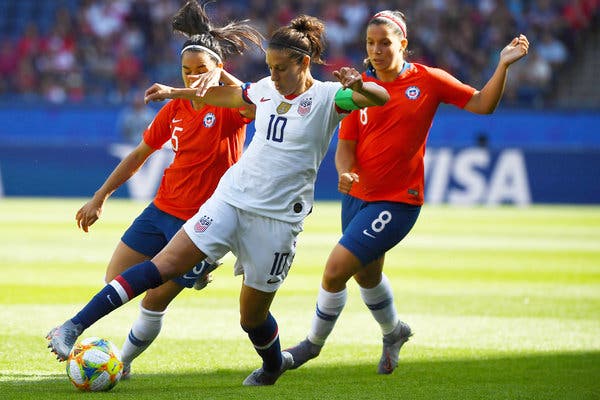 The United States easily reached the last 16 of the Women’s World Cup as they produced another commanding display to beat Chile in Paris.

Having opened their campaign with a ruthless, record-breaking 13-0 win over Thailand on Tuesday, the USA quickly got on top of Chile and led early on through veteran Carli Lloyd’s crisp finish.

Julie Ertz and Lloyd then both headed in from first-half corners, before Chile keeper Christiane Endler pulled off several stunning second-half saves to prevent the holders adding to their lead.

The world’s number-one side, who rested seven players, also hit the woodwork three times before Lloyd dragged wide from the penalty spot, missing the chance to become the oldest player to score a World Cup hat-trick.

Chile, who are playing in their first World Cup and remain winless in 2019, must now beat Thailand to have any hope of progressing to the knockout stages as one of the four best third-placed sides.