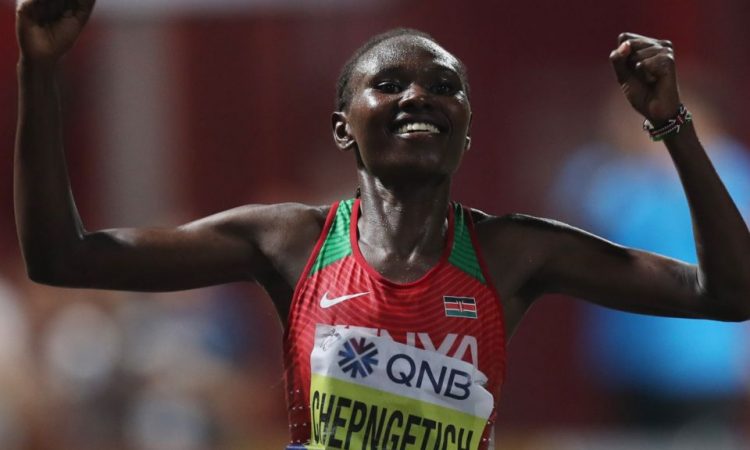 Kenya’s Ruth Chepngetich won the women’s marathon at the World Championships as 28 of the 68 starters withdrew in gruelling conditions in Doha.

In a race that started at midnight local time, Briton Charlotte Purdue was among the athletes to pull out in temperatures of 32C and with humidity reaching over 70%.

Organisers decided to go ahead with the event in its scheduled slot despite fears that the conditions might not be conducive for marathon running.

Linet Chebet of Uganda was taken away in an ambulance after failing to complete the distance, while Italy’s Sara Dossena, another who did not finish, was seen in a wheelchair.

“We never would have run a marathon in these conditions in our own country,” he told BBC Sport.

Chepngetich said: “It was a tough race but I knew what to expect as I ran in Dubai.

“I trained for this weather running in the afternoon when the sun was high.”

The 23-year-old took the first gold of the championships in two hours 32 minutes 43 seconds with athletes attempting to complete six 7km loops of the Corniche in the Qatar capital.

Purdue, the third fastest British female marathon runner in history, withdrew after the start of the third loop. Compatriot Tish Jones pulled out before the race with a leg injury.

Chepngetich was among a small group that included Chelimo, two-time champion Edna Kiplagat, Kenya’s Visiline Chepkesho and Johannes that broke clear from the rest as early as the fifth kilometre.

Israel’s European champion Lonah Chemtai Salpeter was among the pack but dropped out as the quartet stretched away from her.

It became a two-horse race between Chepngetich and Chelimo before the eventual winner surged again, this time decisively, to secure her first major championships medal.

“I was not expecting to be a medallist in such tough conditions,” Chelimo said.