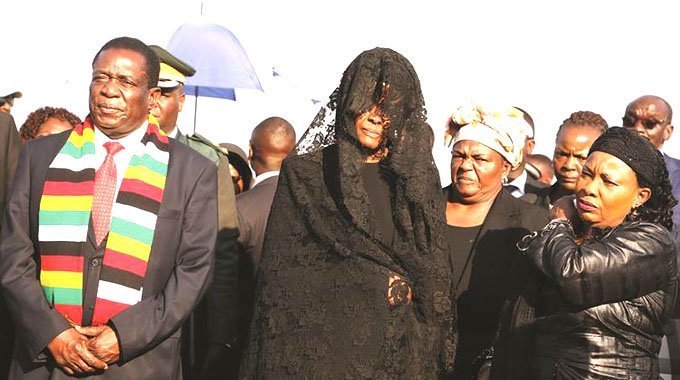 Zimbabwe’s former President Robert Mugabe will be buried in the National Heroes Acre monument in Harare, his family says, following a row with the government over his final resting site.

Family spokesman and nephew Leo Mugabe says the date is yet to be determined.

Before that there will be a public ceremony at the shrine in the capital on Sunday, followed by a ceremony at Mr Mugabe’s home village.

Mr Mugabe, who was 95, died last week while being treated in Singapore.

His body is now lying in state at the Rufaro football stadium in the capital.

Before Sunday’s ceremonies, a state funeral will be held on Saturday. Heads of states of a number of countries are expected.
Leo Mugabe told the BBC that after Sunday’s public ceremony in Harare Robert Mugabe’s body would return to his home village of Kutama.

Clan chiefs and the family would be allowed to perform their own ceremonies there.

Only at a later date – another Sunday as yet to be determined – Mr Mugabe would be finally buried at the National Heroes Acre monument, Leo Mugabe added.

The family had earlier expressed shock at not having been consulted by the government about the funeral arrangements.

President Emmerson Mnangagwa had declared Mr Mugabe a national hero after his death, indicating he should be buried at the national monument.

Mr Mugabe’s family is said to be bitter over him being ousted by his former ally Mr Mnangagwa two years ago.

Mr Mugabe fired Mr Mnangagwa in 2017, in what many believed was a way to prepare for his wife, Grace Mugabe, to succeed him.

Meanwhile, thousands of mourners have been queuing up at Rufaro stadium to pay their respects to Mr Mugabe.

There was a brief stampede on Thursday as people rushed forward to catch a glimpse of the former leader, the Reuters news agency reported.

Trust Nyakabawo told Reuters at the Rufaro stadium: “We are in pain after his death because we were so used to seeing him alive as a father figure that led the country well.”

Rufaro Stadium is where Mr Mugabe was sworn in as Zimbabwe’s first leader in 1980.