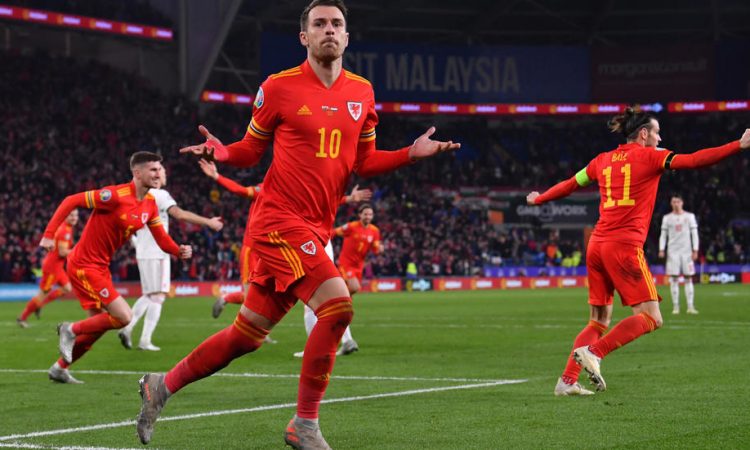 Aaron Ramsey scored twice to lead Wales to Euro 2020 with a 2-0 victory over Hungary in Cardiff on Tuesday.

Wales reached the semi-finals of the European championships in 2016 and while matching that run next year will be a huge ask, there was a glimmer of what they are capable of with Ramsey restored alongside Gareth Bale.

Ramsey was making his first start of the qualifying campaign due to a series of injuries.

And he made an immediate impact by charging into the box to meet Bale’s inch-perfect cross to settle the home side’s nerves on 15 minutes.

Wales still needed a moment of magic at the other end of the field as an incredible double save from Wayne Hennessey denied Dominik Szoboszlai and Roland Sallai an equaliser as Hungary threatened before the break.

However, there was no way back for the visitors once Ramsey controlled Kieffer Moore’s knockdown to smash home from close range two minutes into the second half.

From then on Wales were rampant and could easily have added to their advantage as Bale curled a free-kick inches wide before Daniel James also saw a powerful effort drift just off target.

Only a fine save from Peter Gulacsi denied Ramsey his first international hat-trick 15 minutes from time.

But roared on by a vociferous home support, Wales rarely looked troubled as they produced arguably their best performance since Giggs took charge two years ago at the best possible time.

The former Manchester United winger has had his critics since succeeding Chris Coleman, but can now look forward to leading his country at a major international tournament, a feat he never achieved during a decorated playing career.